The Rosengarten in the Dolomites, traversed for the very first time by Simon Gietl in three days and two nights in March 2022. The 38-year-old completed the first traverse solo and in winter.
Photo by Simon Gietl 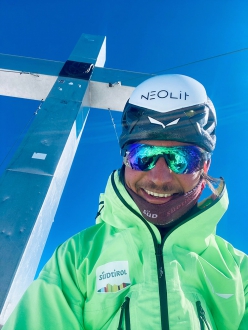 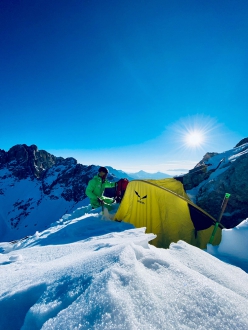 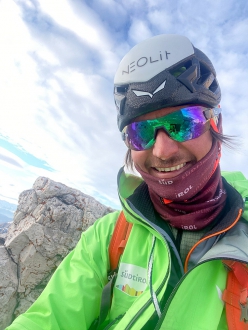 Simon Gietl from the South Tyrol, Italy, has made the first traverse of all the main summits of the famous Rosengarten / Catinaccio skyline in the Dolomites. The 38-year-old mountain guide carried out the crossing alone and in winter.

The famous skyline of the Rosengarten in the Dolomites was traversed for the very first time last week by South Tyrolean mountain guide Simon Gietl who, on his second attempt, completed the obvious line that towers above the city of Bozen. To cap things, Gietl also made the first solo ascent and first winter ascent.

King Laurin’s rose garden isn’t Gietl's home mountain and he therefore turned to his friend and colleague Egon Resch who, in summer, had pieced together many sections of the traverse with Daniel Haböck. The trio decided to attempt the traverse last week but after the first bivouac Resch was hit by rockfall and the alpinists were forced to abandon their attempt.

Gietl remained highly motivated and returned on Tuesday on his own; starting from Karerpass, he climbed from south to north in three days and with two bivouacs, without any gear stash and tagging all major summits in the group.

In total he negotiated 5000 meters altitude gain and was ready for a third bivy but then, as he told planetmountain.com "my friends met me towards the end from Tiers, and they’d promised me a nice cold beer."

According to the 38-year-old the undertaking is "a route that’s absolutely logical. Unlike the Tre Cime di Lavaredo where I know every nook and cranny, here I was climbing a mountain that I hardly know at all. I had to break the trail, self-belay all hard pitches and climb them twice to get my gear, and for three days I didn't see a soul. I was completely alone, and this was exactly the experience I'd been searching for."