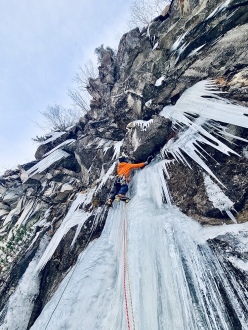 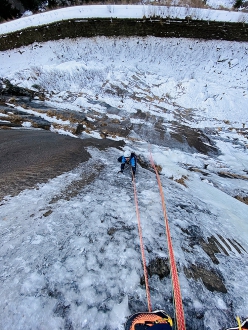 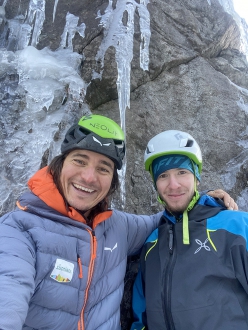 At the end of December 2021, South Tyrolean mountaineers Simon Gietl and Jakob Steinkasserer made the first ascent of Focus, an ephemeral icefall close to Rein in Taufers / Riva di Tures in the Ahrntal Valle Aurina, Italy.

Finding an unclimbed icefall close to home is quite a rare occurrence nowadays but that's exactly what mountaineers Simon Gietl and Jakob Steinkasserer managed to do towards the end of December, with their first ascent of Focus close to Rein in Taufers in the South Tyrol in Northern Italy.

The route is an extremely ephemeral line to the left of the classic icefall Magersucht, and to the right of Top-Maschine, the mixed route first ascended in 2001 by local climber Kurt Astner. The rest of the wall was still unclimbed although the obvious line had been attempted at least twice in the past.

Gietl had noticed the line form in previous winters and hence kept a watchful eye on it, hoping that conditions would permit an attempt. On 12 December he and Steinkasserer made first recce, climbing three and a half pitches before descending. The pair returned on 24 December to complete the first ascent, while two days later they returned to make the first free ascent. As usual, no bolts were added while the 15 pegs used for the ascent have remained in-situ.

"I struggle to give this climb a grade" the 37-year-old mountain guide told planetmountain.com, adding "but WI 7-M8 for the 180m route should be about right. Let’s just say it was without a shadow of doubt the thinnest ice I've ever climbed." The ice was so thin that "for long sections we were unable to find any gear at all, and even when we managed to place a short ice screw, we had to tie it off."

The route has been called Focus, "because in order to climb it you have to seize precisely the right moment, and even then, falling is completely out of the question, especially from pitch three."

Focus is located only half an hour from Gietl's house and, with an approach of only 20 minutes, is considered another "great present". At the start of 2021 Gietl had made the first ascent of another difficult mixed route at Riva di Tures, Dogma, with Mark Oberlechner.