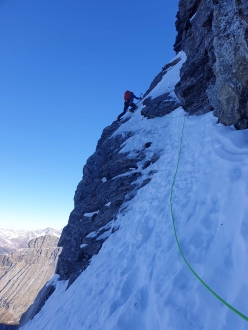 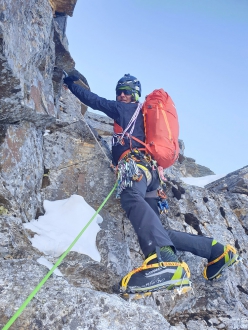 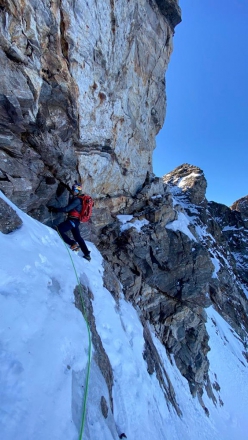 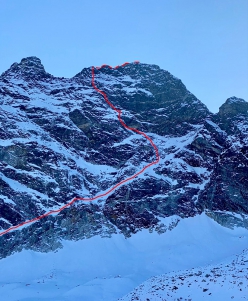 On 29/11/2020 Simon Gietl and Aaron Durogati made the first ascent of a new 500m route on the hitherto unclimbed north face of Mount Rauchkofel in the South Tyrol, Italy. After the ascent, the two climbers paraglided back down to valley. Durogati reports about this latest paralpinism adventure.

On Sunday 29th November Simon Gietl and I established a new line up the north face of Rauchkofel, high up in the Zillertal Alps in the South Tyrol. Thanks to the excellent conditions on the north faces and due to the stable weather Simon and I recently climbed and paraglided off Antelo, Wasserkopf and Hochgall, combining the beauty of a climb with the pleasure of paragliding back down to valley. And it was Simon, clearly an expert of this Pustertal area, who came up with the idea of ​​trying the north face of Rauchkofel which, as far as we know, had never been climbed before.

After meeting at Sand in Taufers at 6 on Sunday morning, we started our approach with fairly light rucksacks despite our paragliders weighing about 2 kg; we’d saved a little weight on just about everything else. Once at the base of the wall we followed a logical ramp then began the ascent proper. After the ramp, ice sections and rock bands alternated as we made our way up the ridge towards the summit.

Flying off the summit is practically impossible as there’s no place to open the canopy, but after descending the ridge we found a slope that enabled us to take off.

The flight was a bit turbulent at times due to the north wind, but after just a few minutes we landed close to Sand in Taufers, super happy for the amazing adventure together.

03.06.2020
Ortler & Königspitze paralpinism linkup by Aaron Durogati, Bruno Mottini
Aaron Durogati reports about his Monday 3 June ascent with Bruno Mottini of the North Face of Ortler and the NE Face of Königspitze / Gran Zebrù. The duo enchained the mountains using a paraglider and needed 9.5 hours for the linkup.