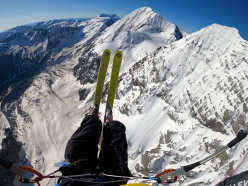 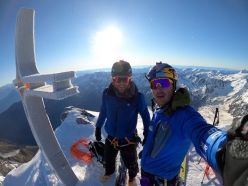 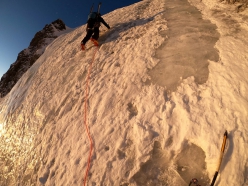 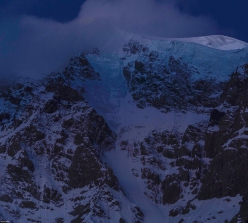 Aaron Durogati reports about his Monday 3 June ascent with Bruno Mottini of the North Face of Ortler and the NE Face of Königspitze / Gran Zebrù. The duo enchained the mountains using a paraglider and needed 9.5 hours for the linkup.

The idea of this adventure is simple: to climb the north face of Ortler as well as the north face of Gran Zebrù in one day and to use the paraglider to transition from one to the other and then back to the starting point.

My initial plan was to climb both north faces in two consecutive days, but after I climbed Gran Zebrù on May 26th I started to consider the challenge of climb both within one day! Finally, on June 1st the weather and snow conditions on the mountains looked good enough for a try.

I met Bruno Mottini in Solda in the middle of the night and at 1 am we started our adventure. The first part of the Ortler north face went well and we managed to use the good conditions to make a quick start without needing to use the rope. The last section, on the contrary, was far more difficult so we decided to rope up and after six hours we approached the summit. Without much rest we quickly prepared our gliders because we were already an hour behind schedule. Just a few minutes later we launched into the air, directly next to the summit cross at 3900m.

Gliding through the smooth morning air we were stunned by the amazing scenery around us. Just ten minutes later we were back on the ground, at the bottom of the Königspitze north face.

The second climb of the day - via the north-east face - was less technical and we climbed fast without a rope, but we swapped lead several times so as to sharing the task of beating the trail. It only took us 1 hour and 40 minutes to the summit. I had climbed this north face a week earlier, and this was one of the key reasons why we were that fast.

OnKönigspitze the wind conditions were more challenging than on Ortler so we decided to ski down about 150 vertical meters. From there  we took off again on less exposed terrain and headed back to our starting point down in the valley. After the first bumpy and turbulent minutes the air got smoother and I even managed to play around with the paraglider and ski. Doing some ski turns and flying between the crevasses was real fun! We landed right next to our car 9 hours and 30 minutes after having set off.

It was definitely a busy morning - we basically never stopped except when changing gear - but achieving such a project in high and technical difficult terrain together with a strong partner and good friend like Bruno was a pleasure.