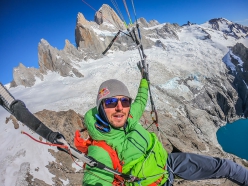 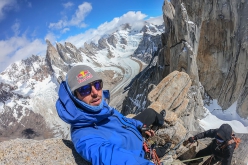 Aaron Durogati in Patagonia: on the summit of Aguja de l’S, Cerro Torre in the background
Photo by Aaron Durogati 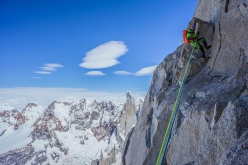 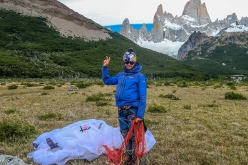 In January 2019 Aaron Durogati, Italian paragliding champion and exceptional mountaineer, flew with his paraglider off some of the most beautiful peaks in the Fitz Roy and Cerro Torre massifs in Patagonia.

"My dream, in all honestly, was to fly off the summit of Cerro Torre with Daniel Ladurner, but unfortunately conditions were prohibitive." This is how Aardon Durogati, exceptional paragliding champion, mountaineer and freerider, sums up his January trip Patagonia with Ladurner. The two had traveled to South America for a somewhat unusual project: paraglide off some of the most famous mountains in the Fitz Roy and Cerro Torre massifs.

As often happens in Patagonia though, the Torre never even gave him the chance to be climbed. During the first break in the bad weather Durogati teed up with a strong group of Italian mountaineers and climbed the Whillans route to summit Aguja Poinceno, but with gale force gusts over 100 km/h taking off from there was a no go.

His launch circa 50 meters below the summit of Aguja Saint Exupery during the second weather window is impressive. "It was one of the most technical takeoffs I've ever done, from a small balcony about 3 meters wide, chossy rocks followed by a huge void. I think this flight, after 15 hours climbing, from a mountain of this calibre, is something pretty exceptional. You need a lot of luck in Patagonia to find the right conditions for flying and I’m super happy that after having climbed for so many hours I was still sufficiently focused to take off from a place where you just can’t afford to make a mistake!"

The actual flight was "beautiful and intense, after a somewhat turbulent start things became smoother and I managed to make some tricks and enjoy the panorama across the Fiz Roy group from a special point of view, from the air! I landed close to our bivouac and waited for my climbing partners who had to rappel for most of the night to join me at around 3 am. Super happy and exhausted, the following morning we descended to El Chalten and celebrated our second cumbre."

The other spectacular flights were from the base of Aguja de l'S in tandem with Tommaso Lamantia because on the summit "the wind was too strong and in the wrong direction for take-off", and close to the summit of the astounding tower Mojón Rojo, as well as from the Guillaumet col.

After practically a month down in El Chalten, Durogati knows the deal. "Let's just say that the area isn’t ideal for tranquil flights," the 33-year-old from Merano told planetmountain.com, "flying in Patagonia is one of the hardest things I've ever done, strong winds are a constant, take offs are quite 'adventurous'. I can understand why no one has really flown here before, and combining climbing and flying was fantastic but at the same time super challenging... The views though are nothing short of spectacular. "

Durogati used a paraglider designed specifically for para-alpinism; checking in at just over 2 kilos, it is extremely stable despite its lightness. In total Durogati’s flying equipment - i.e. the paraglider plus his 200 gram harness - weighted about 2.5 kilos and occupied a volume of about 24 liters. It goes without saying that this weight and volume are more than manageable and that consequently paralpinism is growing in popularity rapidly.

"Seeing these famous peaks from a different perspective was fantastic: flying high above the glaciers, seeing the Fitz Roy up close was spectacular" concluded Durogati. And what about Cerro Torre? "I'll probably return, but in order to fly off it so many different variables all need to fall into place. You need to be lucky and have a window of opportunity to give it go. Then you have to actually be good enough to reach the summit. And, once there, conditions for flying have to be absolutely perfect. But taking off from the rime ice mushroom would be magical. "