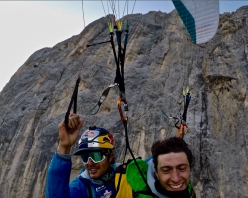 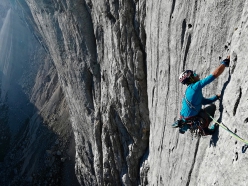 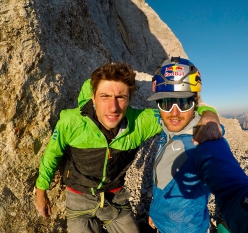 The ledge on Marmolada in the Dolomites, where Aaron Durogati and Mirco Grasso took off with the tandem paraglider
Photo by Aaron Durogati

On Sunday 15 September 2019 Aaron Durogati and Mirco Grasso climbed Moby Dick up the South Face of Marmolada in the Dolomites to the famous halfway ledge from where they took off with a two-person paraglider. The experience reminded the South Tyrolean pilot of his recent paraglides in Patagonia.

A tandem paraglide off the Marmolada halfway ledge. This is what Italians Aaron Durogati and Mirco Grasso got up to last Sunday. A launch therefore off one of the most exposed and difficult to reach places in the Dolomites. In order to do so, the duo first climbed the polished, grey slabs on Moby Dick, the anything but straightforward climb established by Maurizio Giordani and Franco Zenatti from 18 to 20 August 1984, before finding the right mindset for the complicated take-off. The experience proved highly complex and reminded Durogati of the flights he made in Patagonia earlier this year.

Aaron: Moby Dick on the south face of Marmolada coupled with a tandem paraglide with Mirco Grasso off the halfway ledge. Where should we start from?
I’d start by saying that Mirco was heroic. He led all the pitches, up a route which proved not only technically difficult, but also psychologically demanding due to the poor pro. There aren’t many pegs, some pitches of almost 50 meters long and offer only 2 pieces on pro, past some fairly challenging climbing. So just the route by itself proved to be a challenge and the context reminded me of Patagonia.

Did you expect such a difficult climb?
It was more demanding than I’d thought, but Mirco had actually expected it to be difficult, yes. He had talked to some friends who’d retreated so he knew it wouldn't be easy. But the crux pitch, no, he didn't expect that to be so hard. Far harder that the official 6b+ in the guidebook. Fortunately he’s on great form and the the climbing on the limestone south face of Marmolada really suits his style.

Did you already know the ledge itself, i.e. where you wanted to take-off?
No. I’d never been on that part of the ledge, neither of us knew it. I’d seen and studied some photos and thought that, conditions permitting, a launch from there might be feasible.

You made a tandem flight. That’s like adding difficulties to an already extremely difficult operation…
Yes, things definitely become harder. Had I been alone, the take-off would have been difficult. So instead it proved very difficult. A good challenge I’d say. The tandem wing is much bigger than a canopy for just one person, so you need much more space to open it. And the ledge wasn’t large enough to unfold it properly.

Then of course you had to deal with the additional weight
As well, yes. We placed our gear in the haulbag and I carried this on the easy pitches and we hauled it up on the harder pitches. I have two tandem wings, a single-surface one and a more traditional tandem wing. The first weighs just under 3 kilos but has a very limited flight range, it’s not particularly stable during the take-off stage if the winds are stronger that 20 km/h. I thought we’d take off at around 4 pm and I reckoned the wind would be between 20 and 40 km/h, so I chose the most traditional wing. This weighs circa 6 kg, add to this the rest of the gear, plus the haulbag which on its weighs 3 kg. So I was climbing with about 12 to 15 kilos on my shoulders.

You wanted to get to the ledge at 4 pm but?
Yeah, we hoped so, because the south face is still very active because of the thermals, the air is still warm and therefore it rises, if you’re lucky you can still find and exploit the thermals. Unfortunately though we weren’t that quick and we reached the ledge at about 6.30pm. There was almost no wind whatsoever and to find out which way it was blowing we threw some chalk up into the air.

Can you tell us a little about where you took off? What was it like?
At that point the halfway ledge is relatively wide, and slopes downwards at about 30°. The problem is that it’s full of large rocks all over the place that make it difficult for the control lines. When you open the sail, you have to be very careful that the lines snag in the rocks, and that's why I placed it where the rocks are a lot smaller. This meant though that I couldn’t open the sail completely - the glider is 37 square metres, but the ledge was only about 7 meters wide. I managed to open about half the sail, then I placed the control lines carefully to prevent them from snagging. Let’s just say there wasn’t too much room for our launch run.

The take-off wasn’t at all easy therefore
If there’s wind, I can stand and take off from almost anywhere. What I mean is, I can inflate the glider just like a kite without having to move and then take off when it’s above me. If there’s no wind though, you have to create the "lift" by running. My second sail needs about 10-15 km/h to start inflating, and to get to this you need to run for about 10, 15 meters. Let's just say that there wasn’t much room for error. Having said that, I reckon what we did last Sunday was all in control.

And what about the actual flight?
It was a really exciting, for half a minute we just screamed! The flight was awesome, at first to the right towards the Fish route, then up close to the wall before landing about 50 meters from our car. An absolutely stellar flight!

Was it your first flight on Marmolada?
No, with Simon Gietl I’d climbed the Vinatzer - Messner route we made a tandem flight from the summit. But we took off above the glacier, it was like flying from by backyard. From the ledge though things were completely different.

And had you already flown with Mirco?
Only once, last winter. He’s training to become a pilot and we wanted to make a winter climb on Sasso Pordoi and then fly together from the summit. Three pitches below the top though our haulbag somehow became detached and fell down the entire face with all the gear. We abseiled off and the next day managed to recover almost all the gear that had exploded down the wall, then we took off from the base of the mountain. I didn’t want the same thing to happen again and last Sunday I kept checking that the haulbag carabiner was screwed up properly!

We talked about the difficulties ...
Yes. Well the difficulty is made up of several different elements. Firstly there’s the actual technical difficulty of the take-off. This becomes more or less difficult, depending on whether you’re flying in tandem or alone. Then - and this really can’t be underestimated - there’s the fact that you’re not fresh. It’s not like you’ve stepped out of a cable car and are ready to go, no, here you have to be 100% concentrated on a small ledge after having climbed a demanding route. Knowing that, among other things, every 5 minutes count, since the wind can even go from zero to negative. Fortunately, I work really well under stressful conditions.

Did you ever consider not flying?
Well, before I got to the ledge, yes, I was really torn as I didn't know what we’d find up there. On the last pitch in particular everything raced through my mind. Once I got to the ledge I realised that the situation was difficult, but nevertheless manageable. I reckon that I was always in full control of everything I did. I have a wife and a small child waiting for me at home. If the conditions hadn’t been right, I absolutely would have not flown.

Last question Aaron. You said at the start of this interview that the flight reminded you a lot of Patagonia, where you took off from some terrific peaks, such as Aguja Saint Exupery, while your climbing partners descended normally by rappel. What about here?
In Patagonia there were three of us, sometimes even more, so they descended as normal. On Marmolada though there were only two of us. And I couldn't let Mirco ab on his own, could I?!