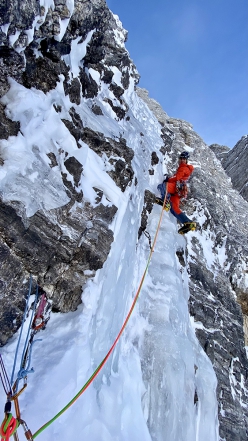 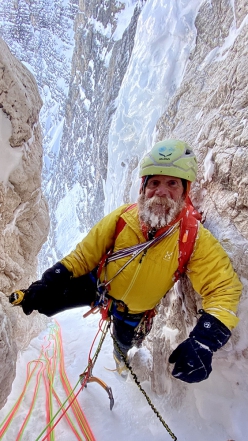 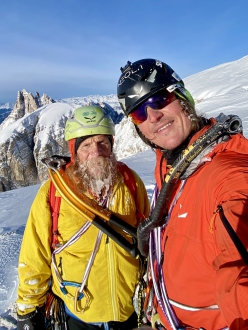 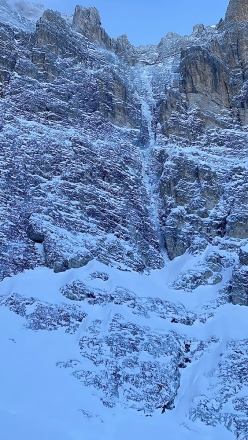 Phoenix added to Hochbrunner Schneid in the Dolomites by Simon Gietl, Andrea Oberbacher

Simon Gietl and Andrea Oberbacher have made the first ascent of Phoenix, a difficult mixed climb on Hochbrunner Schneid in the Italian Dolomites.

Gietl had noticed the line while looking at photos of friends who had climbed the Canalone Schuster-Moser couloir, also referred to as Menschenfresserrinne, and last Saturday with Martin Niederkofler and Florian Harrasser he skinned up this famous ski mountaineering itinerary to check conditions. The weather forecast was bad from Monday onwards so on Sunday Gietl returned to Fischleintal, this time with his colleague Andrea Oberbacher with whom he has established various routes both in summer and in winter.

With temps down to -16°C, the two set off from Sexten at 4:30 am and three hours later they reached the base of the face. A 400m traverse rightwards led to the the start of the drip, which they then climbed in 6 long pitches.

"The first few meters were better than I’d expected," Gietl told planetmountain.com. "I was worried there’d be no ice in the beginning but thankfully there was, and thankfully it was good enough to climb. The only problem: it was really difficult to protect. We placed no more than a handful of ice screws on the entire route. Luckily after brushing off the snow we managed to place cams on the rock to the left or right of the drip. All belays were equipped with pegs, cams or threads."

As stated, six long pitches led to a circa 100m high snow couloir, and in addition to the technical difficulties the guides had to battle against constant spindrift and intense cold. The selfie on the summit plateau was taken at 14:40, after which they quickly descended down the route, using Abalakov threads on the first two abseils, and the previous belays for all the rest. At 17:00 there returned to the base of the route and, following the light of their head torches, they then skied back down into the valley.

"The route really is amazing" concluded Gietl "a wonderful present right at the end of the year. It’s definitely worth repeating, but not at the moment after these latest snowfalls: the valley is steep and prone to avalanches."

According to preliminary information, the line was attempted a few years ago by local climbers in less favourable conditions and not completed.

16.11.2020
New mixed climb on Wasserkopf in South Tyrol by Simon Gietl, Davide Prandini
On 07/11/2020, just before South Tyrol declared itself in lockdown due to Covid, Simon Gietl and Davide Prandini made the first ascent of Aquädukt (IV, M5 650m), a new mixed climb up the north face of Wasserkopf (3135m) in the Rieserferner group of the Tauern Alps. At 3/4 height the new route joins the route established in 1977 by Werner Beikircher and Hans Kammerlander. Prandini reports.