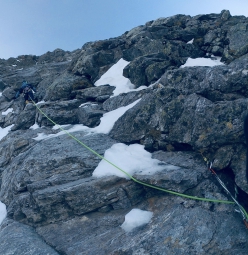 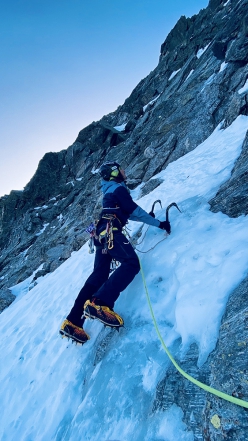 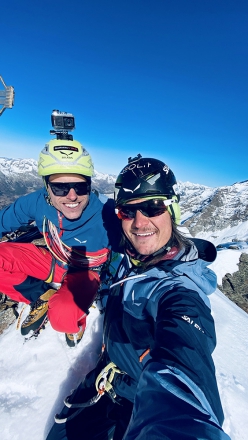 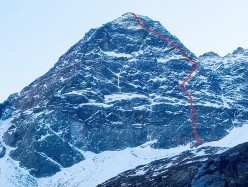 On 07/11/2020, just before South Tyrol declared itself in lockdown due to Covid, Simon Gietl and Davide Prandini made the first ascent of Aquädukt (IV, M5 650m), a new mixed climb up the north face of Wasserkopf (3135m) in the Rieserferner group of the Tauern Alps. At 3/4 height the new route joins the route established in 1977 by Werner Beikircher and Hans Kammerlander. Prandini reports.

A few days ago Simon Gietl and I were climbing at the crag and discussed what might be in condition up in the mountains and, given how warm it had been for the last ten days, we started thinking about the north face of Wasserkopf above Gelltal (Val Fredda). Simon looked at me and immediately suggested we climb a new line. Given my thirst for adventure and who was making the suggestion, I couldn't say no.

We met on 7 November at the entrance to the Gelltal valley, ready for the relatively long approach in the dark, kissed by the light of the moon and illuminated by the rays of our headlamps. Below the face we geared up, prepared ice axes, crampons, harnessed and of course the rope. We decided to continue on up with a single backpack in order to be lighter and, consequently, faster.

At around 7 am, at the first light of day, we started climbing. This immediately proved to be varied and fun, mainly on fairly solid rock past some sections with very little ice. Despite the fact that the wall appeared very dry compared to spring or previous seasons, the snow cover was good across all the various ledges and above all it bore our load, providing good ice axe placements.

Throughout the first part of the route we climbed mainly on rock, with some pumpy but always very fun moves, in order to breach the steeper and more demanding sections that led to the various ledges. The second part of the route followed steep snow-covered terrain interspersed with some rock and mixed sections.

At 2/3 height we reached the north-west coloir (150m, 50°) and then continued to the summit following the last pitches of the Kammerlander-Beikircher route. Low temperatures and a fair bit of ice are needed here quality of the rock changes significantly here; it requires utmost care and attention since it’s fairly loose.

At around a quarter past 12 we reached the sunlit summit and enjoyed the beautiful view on such a clear day. We were happy and after the usual summit rituals we descended down the normal route to retrieve the gear we’d stashed at the base of the wall and return back down into the valley. At around 3 pm we reached our cars and, in doing so, crowned the end of a great adventure. Unfortunately, we weren’t able to celebrate with a cold beer at a bar due to Covid restrictions.

We simul-climbed some sections using a t-block, while on the entire route we used only trad gear apart from two pegs used on two belays, and another two pegs for the last belay on the the Kammerlander-Beikircher route. All 4 pegs were left insitu. No bolts were placed.

We always climbed following the most logical, easiest line up the North Face. Aquädukt provides moderate difficulties throughout and is a fun outing. We believe it has the hallmarks of becoming a classic.

For a repeat we recommend a series of cams from the smallest up to 4 BD.