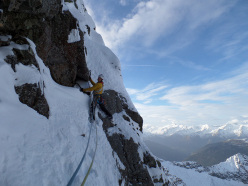 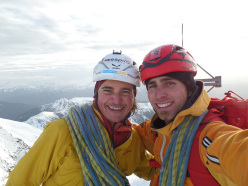 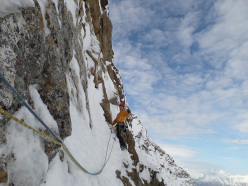 On 25/11/2014 Simon Gietl and Vittorio Messini made the first ascent of Hakuna Matata (V, M6 650m), a new mixed and ice climb up the North Face of Wasserkopf (3135m), Rieserferner group, Tauern Alps. The new route crosses, at 2/3 height, the line first climbed in 1977 by Werner Beikircher and Hans Kammerlander.

After returning from our expedition to China, Vittorio Messini and I set off on our new mountain adventure. On set off early in the morning on 25 November, up through the Gelltal valley, next to Rein in Taufers. Following the light of our headtorches, we talked and joked about our China experience where, together with Daniel Tavernini we had made the first ascent of Tirol Shan.

After 2.5 hours we reached the base of the Wasserkopf our new project. Our aim was to climb a new line directly up the North Face and at 8:00 we were ready to go. The first three pitches proved demanding and Vittorio exclaimed "If the climbing continues like this, I don't know whether I'll manage!"

We saw that only 20 metres separated us from the gully we'd noticed from below. The first three metres were difficult to judge and my crampons didn't get any good purchase. Only my ice axes were more solid than I initially thought. But when one began to slip out of the hold I told Vittorio to move to the side, since I was battling for every centimetre right above his head. 5 seconds later I fell into the snow next to him, thinking "Well, good morning!” Suddenly I was wide awake and shot up the pitch without falling.

A snow gully led us to the first snow field, which we traversed rightwards to reach the upper edge . After a short rest Vittorio took over the lead. Although the terrain wasn't much easier than before, Vittorio forged on ahead without any hesitation whatsoever. Every now and then we looked at the photo, on which we'd traced a possible line of ascent, to avoid getting lost on the face.

Shortly after 13:00 we reached the top of the second snowfield. There we had an energy bar and drank a sip of water before climbing up the steeper terrain. The rock quality changed, requiring extreme caution as it was very brittle indeed. "Vito, I'm safe, you can follow!"! I shouted down with joy to my climbing partner down who answered by inquired about how good my belay was: "Good enough, and we should be able to climb the next pitch, too." We reached the ridge three pitches later, from where easy terrain led to the summit. We were extremely happy and after having congratulated each other with the usual "Berg Heil!" we descended down the normal route to celebrate our new line at 18:30 sharp.