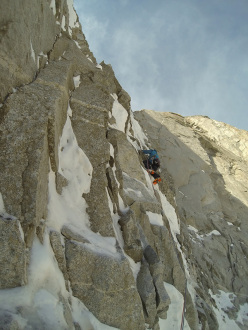 Wildgall. Seltene Erden takes the obvious corner on the left to the col.
Photo by archivio Johannes Bachmann & Manuel Tinkhauser

On 8/04/2014 Johannes Bachmann and Manuel Tinkhauser made the first ascent of Seltene Erden (80° M4+ V+), a new ice and mixed route up the NE Face of Wildgall / Collaspro 3273m, (Rieserferner Group, Tauern Alps).

At the start of April the two South Tyrolean alpinists Johannes Bachmann and Manuel Tinkhauser put up a new climb in their backyard Wildgall, a wild peak also referred to as Collaspro in Italian. The idea of climbing the obvious corner system up the NE Face came in 2011 while climbing up an opposite facing peak. "We immediately thought it had something to Mont Blanc about it, it felt particular due to all those couloirs wedged in between the granite."

The ascent was scheduled for Tuesday 8 April and 31-year-old Bachmann told Planetmountain "When we got to the start of the couloir we realised that it was going to be our day. We're a close-knit team and we climbed fairly quickly, topping out on the ridge at 11:30. My village lay way down there in the valley, what a sight!"

Once on the ridge Bachmann and 30-year-old Tinkhauser did not continue on to the summit but instead opted to descend. "We were happy but had to deal with the cold front that had reached us. There wasn't any time to reach the summit, also because we wanted to equip the belays for the next climbers." This takes little away from the experience, as Bachmann concluded "Apart from having climbed such a direct line almost to the summit, we enjoyed a spectacular day in the mountains. We really didn't expect such a great day out, all we wanted to do was climb a bit and we didn't imagine in the slightest that things would turn out so well."