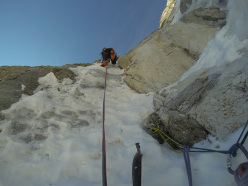 Despite the route being only just over a month old, Seltene Erden has already been repeated numerous times. Everyone confirms that the line climbed by Johannes Bachmann and Manuel Tinkhauser is a superb outing and, watching the video of the first ascent, it's easy to see why.