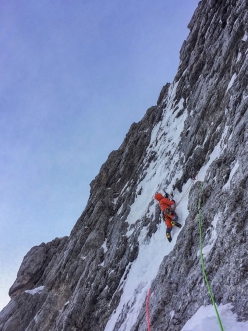 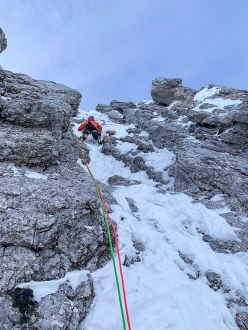 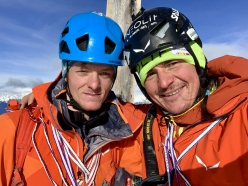 Mark Oberlechner and Simon Gietl on the summit of Peitlerkofel, Dolomites on 26/01/2019 after having made the first ascent of Kalipe up the mountain's North Face
Photo by archivio Simon Gietl 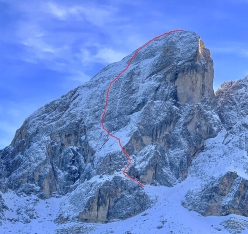 The route line of Kalipe up the North Face of Peitlerkofel, Dolomites (Simon Gietl, Mark Oberlechner 26/01/2019)
Photo by Adam Holzknecht

On 26 January 2019 Italian mountaineers Simon Gietl and Mark Oberlechner made the first ascent of Kalipe, a difficult new ice and mixed climb up the North Face of Peitlerkofel / Sass de Putia in the Dolomites.

Winter 2018/2019 in the Dolomites continues to keep on giving. The latest in a series of great new winter climbs is Kalipe, established at high speed on 26 January 2019 by South Tyrolean alpinists Simon Gietl and Mark Oberlechner up the extraordinary north face of Peitlerkofel / Sass de Putia.

Gietl had noticed the line in mid-January and had made his way to the Würzjoch pass on 18 January 18 to examine the face and take some pictures, before returning on the 24th with Davide Prandini. "The idea was just to haul our gear to the base of the mountain and break the trail, we had no idea how much snow there was" Gietl told planetmountain.com "but once we got there we failed to resist and climbed the first six pitches, until darkness set in."

On Saturday 26 January Gietl returned, this time with Mark Oberlechner with whom he had established the mixed climb Räuber Hotzenplotz at Campo Tures at the end of December 2018. Thanks to the trail the duo started climbing at 6:30 in the morning. Gietl explained "On the first pitches the strong, cold north wind made the climbing unpleasant. The already low temperatures felt even colder until we reached obvious line of ice. The ice that we then climbed was as delicate as it was difficult. The crux pitch proved to be extremely serious and it was almost impossible to place any reliable pro. This demanded total concentration and extreme caution, as a fall here is strictly prohibited. After that the angle eased off considerably, the climbing became technically easier and far more relaxed."

The duo protected the route with ice screws and trad gear, and placed 5 rock pegs, exclusively at the belays. After about 200 meters the ice diminished and Gietl and Oberlechner simul climbed to the summit by following the obvious gully and ridge. They topped out at 11:50 and then descended, extremely cautiously down the snow-covered normal route.

Kalipe is 600m high, has been graded M6 and starts up Via Hruschka, the first route up the north wall established on 24 August 1919 by W. Erschbaumer, J. Hruschka, F. Neuner and L. Radschiller. At the snowfield Kalipe trends left to the obvious ice drip - in summer this steak is almost always wet and consequently there are no other routes at this point - before finishing up Pinatupo (Luigi Tiddia, Cristina Fronza, Edy Boldrin, Davide Marinovich, summer 1991).