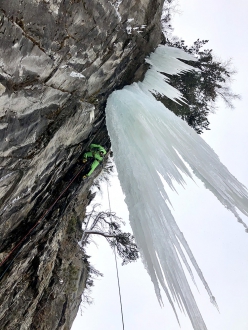 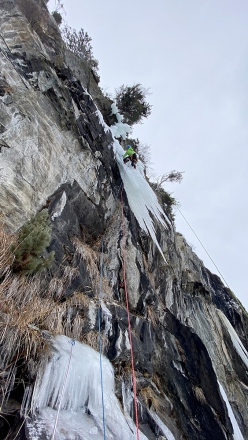 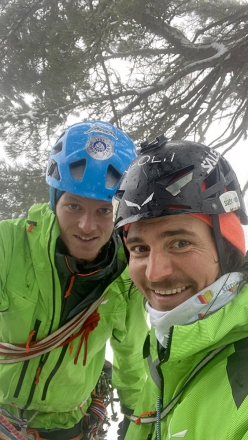 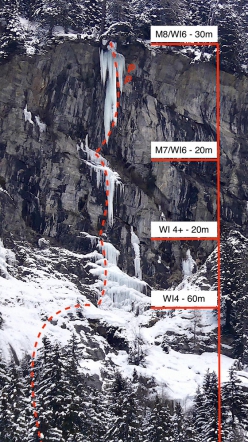 On Saturday 30 January 2021 the mountain guides Simon Gietl and Mark Oberlechner from the South Tyrol, Italy, made the first ascent of a difficult mixed climb at Rein in Taufers called Dogma.

One of the most obvious but also most transitory fleeting icefalls at Rein in Taufers was finally climbed at the end of January by Simon Gietl with one of his traditional climbing partners, Mark Oberlechner. The new route has been called Dogma and is the huge drip that is clearly visible from the road that leads into the Ahrntal valley. Although it forms regularly, it also tends to collapse almost immediately.

"Like many I’d watched the icefall as it got fatter and fatter, from the road you can easily see the upper section, the bulk of the route, the highlight of the whole climb" Gietl told planetmountain via phone "but even though it forms regularly, the problem is that it faces south. In recent years, whenever it seemed like it might go, it suddenly collapsed. I realised that the temperatures had to be just right, the amount of water that feeds the drip must be perfect and above all you have to be lucky with the sun: it has to be covered behind the clouds for several days."

Towards the end of January Gietl noticed that all these factors had aligned and that the time to attempt the climb had come. "It had been very cold in the previous weeks and the forecast was overcast, so on Saturday I met up with Mark Oberlechner, with whom I’ve already established several routes in the past such as Utopia here at Riva di Tures, or Kalipe on Sass de Putia."

The two mountain guides ascended the first two pitches, which had been climbed previously by others, without difficulties, past perfect WI4+ ice. An ideal warm-up. "Actually it wasn't even that cold, the thermometer displayed -1.5°C at the car and I was afraid the sun would come out. I knew the dagger could break at any moment."

The third pitch led past some dry tooling section, to the first drip; 20 meters of M7 and WI 6 led to a belay on the left. "The rock is very steep and it was only then that we realised how much it was overhangs, and how big the drip above us really was. Impressive." added Gietl.

From below it was unclear how they might reach the drip but from the belay they noticed a razor thin crack that trended diagonally from left to right. "This ended up being far better than we’d hoped and I climbed the crack with a mix of free climbing and aid, it was dirty, full of small stones and needed cleaning. After a dozen meters protected with cams I reached the huge drip. I confess that I wasn’t completely at my ease while stretching out and climbing the ice, actually, I didn’t trust it enough to even place an ice screw and so it was only when I reached the top and hammered in two pegs that I heaved a sigh of relief and reached the tree at the end."

At this point, Oberlechner lowered Gietl and he set off almost immediately. "A few minutes earlier I’d climbed with some rests and now I wanted to climb it free, even if I’d left some cams in the crack because taking them out would have been too complicated. Unfortunately a hold snapped and I fell!"

Oberlechner lowered him to the belay a second time after a few seconds rest Gietl started upwards for the third time. "Third time lucky! When I got to the top I belied Mark as he seconded without problems, then we abseiled and we celebrated properly. I can't deny it, I'm mega happy with this super present practically at my doorstep. It’s a great mixed climb. A 5-star line. This doesn't happen often. It really was worth waiting all these years to seize the right moment!"

Speaking of the seizing the right moment: Gietl was supposed to return two days later for a photoshoot, but for various reasons he was forced to cancel the appointment right at the last minute. Which wasn’t a bad thing really, seeing that the drip had already collapsed that afternoon…