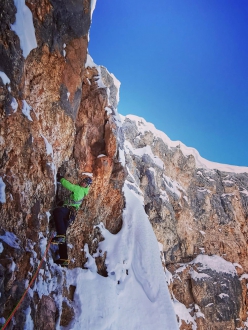 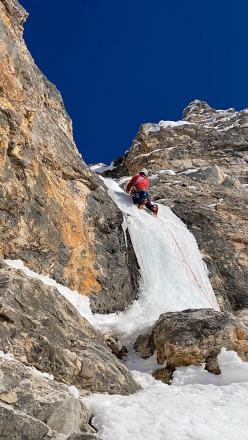 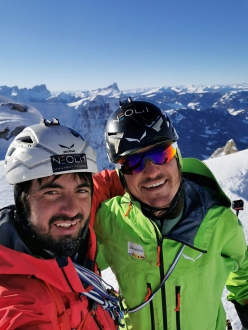 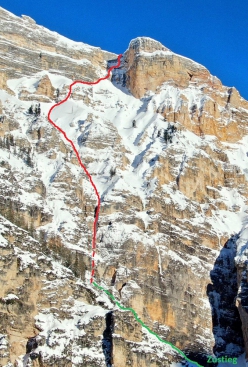 PORTFOLIO / gallery Portfolio: Sorejina at Sennesspitze in the Dolomites climbed by Manuel and Simon Gietl

After his recent first ascent of Phoenix on Monte Popera, it’s Simon Gietl once again who’s taken up the new-routing baton with a 700m high new addition to the SW Face of Sennesspitze (also referred to as Monte Sella di Sennes or Muntejela de Sénes, the 2787m peak located inside the Fanes-Sennes-Braies Natural Park known in winter above all as a sought-after ski mountaineering destination.

Simon Gietl teamed up with his elder brother Manuel early on Sunday 10 January to attempt an frozen icefall that Manuel had noticed in April a few years ago whilst establishing a new rock climb, but this time the drip had not formed. Fortunately, a few hundred meters higher the brothers noticed a possible line and "we decided to take a look. Just to give it a go."

The ascent proved challenging but fun, with a difficult third pitch graded WI5+ which at noon was already in full sunshine. At the end of this they decided to bail to return earlier the next morning, and by 10:00 on day 2 they’d already reached this highpoint. Another strenuous 150 meters past steep snow led to two mixed pitches, after which, following the most logical line of least resistance, they traversed rightwards before climbing "three fantastic mixed pitches" and topping out on the summit plateau. At the top, after seven and a half hours of climbing almost always in the shadow, was the sun and an "overwhelming view” across the Dolomites.

The Gietls descended on foot past Munt de Sennes and the Pederü hut to reach the car at 17:30. The thermometer indicated the same temperature as when they’d set off 12 hours earlier: -23.5°C. The new route is called Sorejina, Daughter of the Sun, and has been graded WI5+, M6, 50°, 700m.

16.11.2020
New mixed climb on Wasserkopf in South Tyrol by Simon Gietl, Davide Prandini
On 07/11/2020, just before South Tyrol declared itself in lockdown due to Covid, Simon Gietl and Davide Prandini made the first ascent of Aquädukt (IV, M5 650m), a new mixed climb up the north face of Wasserkopf (3135m) in the Rieserferner group of the Tauern Alps. At 3/4 height the new route joins the route established in 1977 by Werner Beikircher and Hans Kammerlander. Prandini reports.