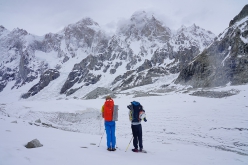 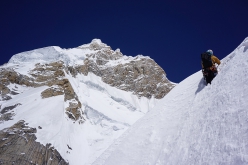 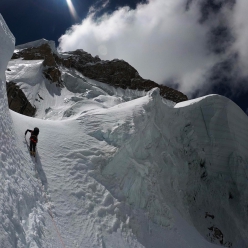 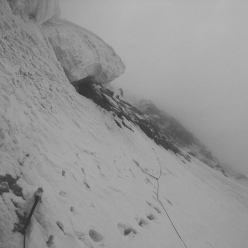 In June 2021 Tom Livingstone and Mathieu Maynadier attempted the unclimbed SE Ridge of Pumari Chhish East in Pakistan. Due to prohibitive conditions they descended from 6750m.

Mathieu Maynadier (France) and Tom Livingstone (UK) travelled to the Hispar region of Pakistan on 18 June, after several delays due to Covid. The pair reached a lush 4500m base camp near the Jutmaro glacier the 26th June with stunning front-row views of the south faces of Pumari Chhish Central (7492m) and East (6850m). They spent a few days acclimatising as much as possible and hiked to 5600m, but their plans were cut short due to mixed weather.

The following week was also poor weather, with intermittent snow at base camp and poor weather even for base camp bouldering and swimming. However, the pair were able to find a way to the base of the south face of Pumari Chhish East, navigating a tricky glacier, and cached gear ready for an attempt.

Thursday 8 July marked the start of the first of 4 days of good forecast weather. This wasn’t enough time to attempt their main objective, however they chose to attempt a consolation prize of the still unclimbed south-east ridge of Pumari Chhish East.

On Sunday 12th they camped at about 6400m and woke up to thick cloud and heavy snow. They climbed to around 6750m in deteriorating weather, despite this being forecast to be the fourth and final day of good conditions. Heavy snow, spindrift, thick cloud and wind made them feel like they were climbing in Scotland in winter, and unfortunately they retreated, returning all the way to base camp later that night.

With more bad weather forecast, the pair left base camp on 18 July.