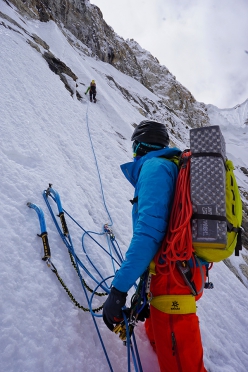 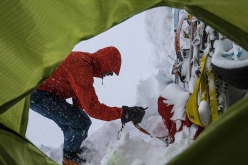 Latok I: 'A snow storm just 300 m below the top of Latok was the moment when we were convinced we would have to return without the final summit push. Fortunately, the weather improved soon after - allowing us to finish our climb in best possible way.'
Photo by archive Aleš Česen, Luka Stražar, Tom Livingstone 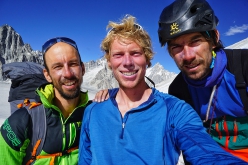 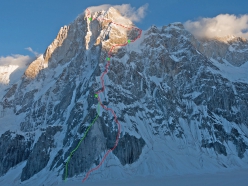 The documentary of Aleš Česen, Tom Livingstone and Luka Stražar in summer 2018 making the coveted second ascent of Latok I 7145m in the Karakorum, Pakistan.

Over 7 days in August 2018 Slovenian mountaineers Aleš Česen and Luka Stražar and Britain’s Tom Livingstone climbed Latok I, the difficult 7145m summit in Pakistan’s Karakorum. The three climbed 2/3 of the formidable north ridge then traversed sharply right to a col and continued to the summit via the mountain’s south face.

Despite four decades of attempts by some of the best climbers in the world, theirs was only the second ascent after the 1979 first ascent carried out by a Japanese expedition led by Naoki Takada. Sin'e Matsumi, Tsuneo Shigehiro, Yu Watanabe, Hideo Muto, Jun'ichi Oku and Kota Endo successfully summited.

Here is the documentary of the 2018 ascent that earned Česen, Livingstone and Stražar the Piolets d'Or 2019.