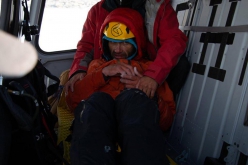 Alexander Gukov inside the helicopter that rescued him off Latok I.
Photo by www.mountain.ru 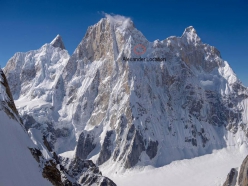 Latok I: the point where Alexander Gukov was rescued by helicopter
Photo by www.mountain.ru 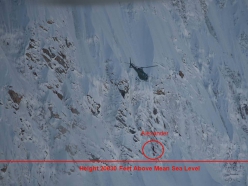 Latok I: the precise point where Alexander Gukov was rescued by helicopter
Photo by www.mountain.ru 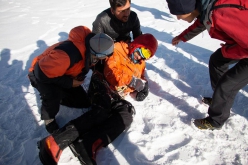 Latok I: Alexander Gukov at base camp after 6 days trapped at 6200 meters
Photo by www.mountain.ru

Alexander Gukov rescued on Latok I

Russian mountaineer Alexander Gukov, trapped for over 6 days on Latok I, has been rescued by the Pakistani military helicopters.

In what must be considered an absolute miracle, Russian mountaineer Alexander Gukov has been plucked off the slopes of Latok I after having been trapped for over 6 days at circa 6200 m following the death of his climbing partner Sergey Glazunov.

Published below is the full report sent by Anna Piunova of www.mountain.ru and written by her Pakistani partner who has helped coordinate the rescue mission.

After persevering and putting their lives in danger for two consecutive days, the pilots of 5th Army Aviation High Altitude Squadron proved once again that they are amongst the best by rescuing Alex Gukov through sling operation at 6300m. Nature finally backed off...

The weather cleared up during the night. This morning it was mostly blue skies with some clouds hanging around Latok. And this is what tilted the balance in favor of the brave pilots of the Fearless Five. However they had to fight strong winds at 6300m during the sling operation.

The formation (2 X Écureuil B3s) took off from Skardu AAB at 0455 hours and arrived at Latok BC around 0530 hours. They passed by Jhola Camp to lighten down the helis. At Latok BC, the pilots decided to first run a search mission to identify the exact location of Alex. The fixed line was connected to the B3s at the BC (but the sling was kept inside the heli) and the helis took off for the mission at around 0545hours. Fuel was taken off at BC to lighten the helis and make a fuel depot at the BC to be used later for rescue attempts during this operation.

The Écureuils went up the mountain and flew for around 45 minutes at 6300m before spotting Alex on a narrow ridge. Due to heavy snowing, the orange tent was under snow. The plan for the first attempt was to spot Alex and recce the terrain before coming down to BC and then going back up again for the extraction mission with the right fuel load. However, once Alex was spotted, the B3s had enough fuel left to attempt one sling operation. The pilots decided to go for it.

The weather was good but the strong winds were constantly creating turbulence for the B3s. It was difficult free-air hovering with these strong winds at that altitude. However, for once Nature was helping them out. The outside temperature was -8 degrees and this helped them free-air hover at 6300m (according to their calculations, ideally they needed -10 degrees). In the last couple of days, the temperature was much higher.

One heli threw the sling hovering close to the ridge. The other B3 was hovering right behind him giving adjustment instructions about sling end with D ring to the lead heli. Thus the two B3s worked in tandem. After trying for 15 minutes, Alex finally managed to get hold of the sling and connected the D ring to his harness. The heli flying back confirmed the safe engagement and instructed the lead heli to pull off with Alex attached. The fuel level was getting critically low by then. However, it was touch and go as Alex had forgotten to remove his anchor to the mountain. Thus he found himself connected to the sling of the B3 on one end and Latok to the other as the mountain refused to let him go. The pilots were extremely lucky as Alex's Latok anchor finally gave away releasing him. The B3s pulled out and brought Alex to safety at the BC from where he was taken directly to CMH Skardu.

He is in a good strong shape and doctors at CMH are taking good care of him. Rest In Peace, Sergey! He'd stay in our heart and prayers.