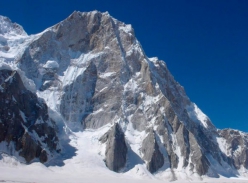 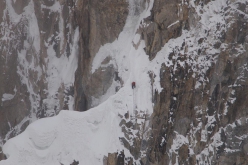 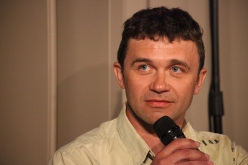 Alexander Gukov, winner of a Piolet d’Or in 2015 together with Aleksey Lonchinsky for their ascent of the SW Face of Thamserku
Photo by Lanzeni / Piolets d'Or

Dramatic hours on Latok 1 (7,145 m): Russian mountaineer Alexander Gukov is currently trapped at 6200 meters after witnessing the death of his climbing partner Sergey Glazunov. A rescue operation is currently underway in a race against time.

A high altitude drama is currently unfolding in the Karakorum where one of Russia’s top alpinists, Alexander Gukov, is trapped high on the slopes of Latok 1 after reporting the death of his climbing partner Sergey Glazunov.

Gukov and Glazunov had travelled to Pakistan with the aim of completing the mountain’s North Ridge, famously first attempted over 26 days in 1978 by Jim Donini, Michael Kennedy, Jeff Lowe and George Lowe. In the ensuing 40 years the fearsome and seemingly never-ending crest line has been attempted repeatedly by a string of many of the world’s leading alpinists, and in 2017 Gukov, Anton Kashevnik and Valery Shamalo reached 6700 meters before descending due to lack of food.

According to Anna Piunova of www.mountain.ru, Gukov and Glazunov set off 14 days ago with only 5 days food supply for their summit bid on what has come to be known as one of the biggest prizes in high altitude mountaineering. A GPS signal received on 24 July pinpointed the two at 6975m, but tragedy struck a day later when Sergey Glazunov fell to his death while rappelling.

Gukov launched an SOS message from 6200 meters and a rescue operation was mobilised immediately. Poland’s Adam Bielecki and Andrzej Bargiel and Germany’s David Göttler all offered to join the rescue operation. Bargiel is currently at Skardu and Bielecki and Göttler are both in Gasherbrum II base camp, and as we write a helicopter attempted but failed to reach them in order to transport them to Latok I Base Camp. Weather conditions are unfortunately far from ideal.

30.01.2018
The Nanga Parbat rescue
The rescue of Elisabeth Revol on Nanga Parbat by Denis Urubko, Adam Bielecki, Jarek Botor and Piotr Tomala, and the greatness of all rescuers and those who do not hesitate to help those in need.