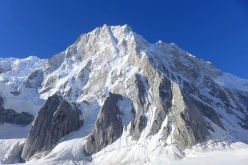 Latok I and the formidable North Ridge.
Photo by Luka Lindic 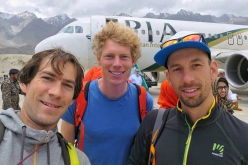 Aleš Česen, Tom Livingstone and Luka Stražar on arrival at Skardu on 07/07/2018
Photo by Aleš Česen

Slovenians Aleš Česen and Luka Stražar and Briton Tom Livingstone have climbed Latok I (7145 m) in the Karakorum (Pakistan), This is only the second ascent of the mountain, after the first ascent carried out by a Japanese expedition in 1979.

UPDATE ON 15/08/2018
First details are emerging and it is likely that the integral ridge line was not climbed from start to finish. In an SMS to Anna Piunova of the website www.mountain.ru, Česen explained "We took thr NR for 2/3 of the way, then turned right to reach col between L1 & L2, and continued on S side. For us was logical (safe) line like this. It took us 7 full days round trip.” This would indicate that the full ridge from start to finish has not yet been climbed. This obviously detracts nothing from the monumental achievement carried out by Aleš Česen, Luka Stražar and Tom Livingstone which remains, as previously reported, only the second successful ascent of the mountain after the Japanese first ascent in 1979, and the first ever from the north. We will post updates as soon as more details become available.

Forty years after the legendary first attempt, the fearsome North Ridge of Latok I has now finally been climbed all the way to the summit by the Slovenian mountaineers Aleš Česen and Luka Stražar and Britain’s Tom Livingstone.

Considered one of the biggest prizes in high-altitude mountaineering in both the Karakorum and the Himalayas, the long and highly technical North Ridge of Latok I was first attempted in 1978 by the Americans Jim Donini, Michael Kennedy, Jeff Lowe and George Lowe. Climbing alpine style, the four spent a total of 26 days on the mountain but were eventually forced to descend circa 150 meters below the summit due to Lowe’s deteriorating health. At the time the enterprise was celebrated as "the most remarkable failure in climbing history" and in the ensuing years the "impossible ridge" was attempted unsuccessfully dozens and dozens of times by some of the best mountaineers in the world.

Not even two weeks ago the ridge made headline news across the world due to the death of Russian mountaineer Sergey Glazunov and the subsequent rescue of his climbing partner Alexander Gukov.

Česen, Stražar and Livingstone departed for the Karakorum on 6 July and immediately on reaching Latok 1 base camp on the Choktoi glacier offered to support the rescue operation. Climbing the mountain in those conditions was absolutely prohibitive though and after being trapped for 6 days at 6200 meters Gukov was plucked off the mountain thanks to a daring helicopter rescue with longline.

At present there are no precise details about the ascent of Česen, Stražar and Livingstone. News broke on Saturday 11 August when the Slovenian Alpine Club posted "Aleš, Tom and Luka returned to the base of the mountain a few hours ago, we climbed a new route on the North Ridge and reached the top of Latok 1. Now... sleep." According to preliminary reports the trio required 7 days and on the upper section of the route they opted for a safer line by moving away from the ridge proper in order to reach the summit.

The recent ascent is only the second successful ascent of Latok I, after the first ascent carried out in 1979 by a Japanese expedition led by Naoki Takada via the mountain’s south face; the first to summier were Sin'e Matsumi, Tsuneo Shigehiro, Yu Watanabe, followed three days later by Hideo Muto, Jun'ichi Oku and Kota Endo.

09.11.2012
Janak West Face, first ascent in the Himalaya by Marcic and Strazar
The Slovenians Nejc Marcic and Luka Strazar have made the first ascent of Blue Racer (80°, M4, 1100m), a new route up the virgin West Face of Janak (Himalaya).