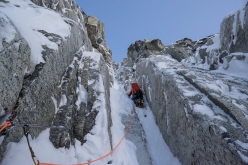 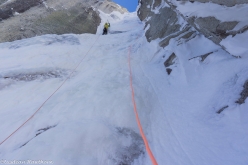 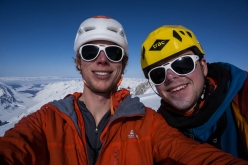 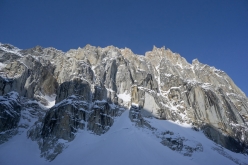 British mountaineers Tom Livingstone and Uisdean Hawthorn have made the first ascent of Fun or Fear, a new climb up the East face of Mt. Jezebel in the Revelations range of Alaska. Climbed alpine style over two days, the route breaches difficulties up to M6+, 90 deg neve, Ai6 R.

In early April 2018 British climbers Tom Livingstone and Uisdean Hawthorn successfully climbed a new route up the East face of Mt. Jezebel, a formidable 2880m high granite peak in the Revelations range of Alaska first climbed in 1981 by Peter Sennhauser and Janet Smalley.

The Britis traveled to Alaska intent on forging a new route up the unclimbed 1200 m high North Face of Mt. Jezebel, but an attempt ground to a halt after 8 pitches as difficulties increased sharply while climbing below a looming snow mushroom. Not wishing to place bolts and continue onwards they decided to retreat to their base camp on the Fish Glacier.

After carefully considering their options, the duo opted for an obvious thin couloir on the East Face of Mt. Jezebel, to the left of the original line up this face, Hoar of Babylon established in 2015 by Pete Graham and Ben Silvestre. Setting off early on 6 April, the two climbed 10 technical pitches, interspersed with sections of moving together, to reach the East Ridge which they followed for circa 200 meters to a comfortable bivi spot beneath the large final tower on the ridge, before the col.

The next morning they continued and reached the Northeast summit (2880m) at about 12:30pm, in totally clear conditions with virtually no wind. "It felt like a real treat to be somewhere so special, after a rewarding experience, and with perfect weather. So many ‘unknowns’ had finally been answered. We could relax on the summit, lying down and soaking in the view of endless mountains" explained Livingstone.

They descended by reversing down the East Ridge, descending the SE Couloir and then, as this had deposited them on the wrong side of a col, climbing four pitches back up onto the Fish glacier. This "slightly stressful" descent marked the end to climb that had been "very satisfying and involved some technical climbing, thankfully mostly at the start of the route."

Thanks to the Mount Everest Foundation and the British Mountaineering Council for their grant support.