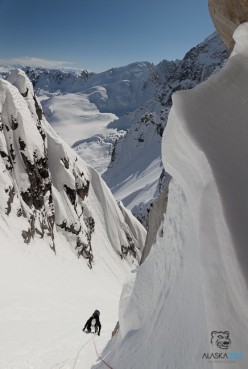 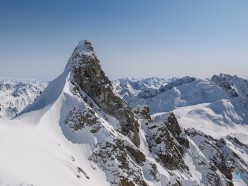 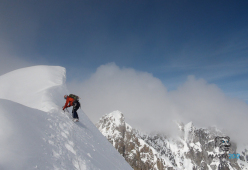 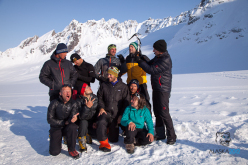 In spring 2012 a Slovenian expedition to the Revelation Mountain range in Alaska resulted in a flurry of first ascents up virgin peaks. The trip report by expedition leader Anze Cokl.

Landing on 12th April on a remote glacier in 30 cm of powder snow and looking at the surroundings, we immediately realised we were in mountaineers' heaven. The weather upon our arrival was perfect and there was a staggering 280 cm of snow atop the glacier ice. We know this because we dug all the way to the ice where we had underground tunnels, food cache and kitchen area for bad weather.

To our knowledge, all but one of the mountains we were interested in were still unclimbed. Prior to flying in, we had investigated thoroughly for what little information we could find in the AAJ and different online reports, trying to find a spot in the Revelations which had been visited the least. After the trip we bumped into Revelation mountains veteran Clint Helander in Anchorage and we carried outa short interview for our documentary, whilst analysing maps and confirming our hopes of untouched peaks to be correct.

Except for 4 perfectly sunny days (2 on arrival and 2 before departure), the weather was mainly overcast with clouds. Numerous days in a row presented a common pattern - cloudy with occasional snowstorms in the morning, improving in the afternoon, with sunny spells and blue skies after 4 pm until sunset. We quickly adapted and seized all but 3 out of 16 days spent on the glacier.

We explored the glacier from top to bottom and managed to climb a few prominent summits along the East and West of the glacier, as well as to the south. We mainly ascended the most logical lines up couloirs, gullies and ridges to the summits of the virgin peaks. There were too many ascents to describe them all, but what follows is a brief overview of those which offered a touch more climbing in very changing conditions.

After setting up basecamp we headed to explore the easily accessible cirque just north of BC and climbed an easy new line Old Horses Route (70º/40-50º, M4, 600m, Ažman, Čokl) to the top of Gendarme on the ridge. We abseiled the top part and downclimbed the adjacent snow couloir when descending.

The Final Frontier (V/3-4, 1100 m) follows the most obvious snow and ice line in the area to the corniced summit. This route was awfully exhausting due to deep powder snow for the first, easier angled part of climb up to 50º (100m to bergschrund + 200m to ice). After the initial slopes, 3 pitches of hard, black ice took Grega Ažman and myself to the upper part of the route, simul-climbing snow and ice up to 65º with the biggest threat coming from the sun heating the snow loaded slopes and a large, family-sized-house cornice overhanging above the line of the route. Grega and Anže summited this new peak in deteriorating weather naming it Freeapproved peak (2709 m). The party simul-downclimbed most of the route except for ice pitches which were abseiled on V-threads.

Climbing winter alpine terrain in three is always fun, so Grega and I took Bor Šumrada along with us which provided the big benefit of an additional pair of legs for wading through deep snow below and above the bergschrund as well as safe(r) and better filming on my part. We started in the most obvious couloir, then immediately headed straight to the summit via a thin gully system ,only to be blocked by unconsolidated and overhanging snow where we had to bail and climb by moving left over good but not easily protected granite. This enabled us to regain snow and ice to ascend the remaining 700m route with the crux just below the summit – an overhanging and poorly protected slabby 10m chimney, packed with sugar snow and absolutely blank rock. Returning from the summit proved an adventure as there was no ice or rock protruding anywhere – it was all wind loaded steep snow so after checking all options, we down climbed the terribly snow-loaded ridge northwards and finally dug out a granite boulder from which we started our abseils to regain our line of ascent. Further down climbing and abseiling led to the big couloir. The new route Sleepwalker up Windy Peak (ca. 2350m) goes at V/4, M5, 700m.

The area truly offers some first class mixed climbing plus perfect granite as well as great and exposed ski lines. The only problem is the weather and conditions – for this time of year we encountered unconsolidated snow, while other parts proved very dry, except for the spindrift lines which had hard neve. This year was supposed to have received a record snow fall and should there have been less snow, then the climbing would have probably be much more rock/mixed-oriented.


Text and Photos by Anže Čokl of Freeapproved Team