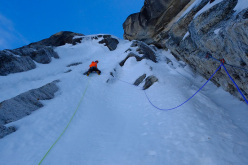 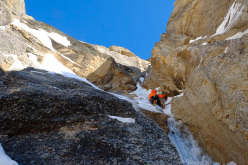 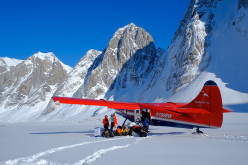 An team of young alpinists comprised of Lise Billon, Pedro Angel Galan Diaz, Jeremy Stagnetto and Jérôme Sullivan have made the first ascents of the ice and mixed routes The Odyssey (M7, 6b, A1, 90°, 1100m) up the unclimbed Pyramid Peak and The Iliad (TD+ 900m) up Mount Boucansaud in the Revelation Mountains, Alaska.

Banking on their success on Cerro Murallón in Patagonia in December 2012, in mid-March this year an international team of alpinists comprised of Lise Billon (25), Jeremy Stagnetto (28) and Jérôme Sullivan (30) from France and Pedro Diaz (35) from Spain travelled to Alaska for the first time to establish two fine lines above the Revelation glacier. The first has been called The Iliad and was forged on 23 April in a continuous 20 hour push up a peak they named Mount Boucansaud, while the second is called The Odyssey and ascends the West Face of the hitherto unclimbed Pyramid Peak. Three bivies were needed difficulties to breach difficulties up to M7, 6b, A1, 90°.

TWO NEW ROUTES IN THE REVELATION MOUNTAINS by Jerome Sullivan

Clint Helander, very active climber and responsible for many first ascents in the range, had shown us some amazing photos of unclimbed summits and projects in the Revelations mountains. Few expeditions have ventured into this isolated range probably because of it’s notoriously bad weather, and the fact that the Denali Range is much closer and cheaper to fly into. Pyramid Peak immediately fascinated us. It was unclimbed and had a very steep and imposing west face.

On the 17th of March we flew out to Talkeetna and stayed in the Revelations until the 2nd of April. Winter in Alaska had been unusually warm and dry and we were quite worried about the conditions we would find there. Fortunately though this strange winter seems to have played in our favor as we encountered more ice than reported by previous expeditions.

Our first aim was to climb a fairly direct line to the summit of Pyramid Peak but after two days of effort, having climbed past thin and unprotectable ice smears we finally dead-ended only 200m meters off the ground... more often than not the cracks were closed and finding a logical line proved complicated. Clint had tried an obvious line to the left but the gully was protected by big overhanging snow mushrooms and a huge roof at the top.

To help boost our spirits we climbed the evident line of Iliad. This prominent shoulder up the South buttress was named Mt Boucansaud, in honour Jean-Marc Boucansaud, our friend and Chamonix-based mountain guide who passed away last winter. It took us 20 hours camp to camp to climb the striking ice smear that runs down the east face. The climb was straightforward alpine ice with two amazing crux pitches of thin ice.

We then spotted the line of the Odyssey. We bivied three times on the face, usually not climbing too early due to cold temperatures. The route had various hard mixed pitches, vertical snow (little ice), and a few easy snow pitches, adding up to 18 steep pitches and three hundred meters of ridgeline to go to the summit. The crux pitches were an overhanging chimney with bulging snow mushrooms and a sketchy traverse to reach a hanging dihedral. The rest of the climbing was often in the M5-M6 range. We descended the northwest face in 9 rappels to reach a big couloir that led us back to the glacier. Protection along the route was quite scarce, and many of the pitches are run-out.