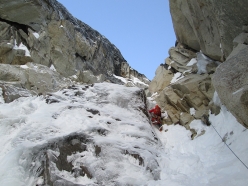 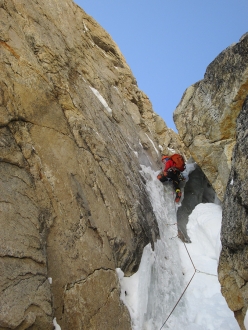 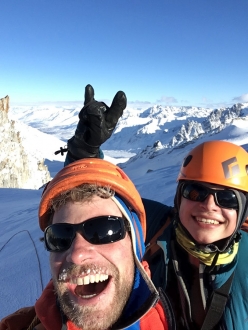 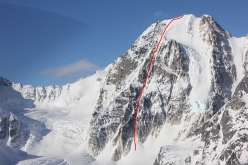 Mountaineering in Alaska: in spring 2017 Lithuania’s Gediminas Simutis (28) and Germany's Frieder Wittmann (31) pulled off a series of interesting first ascents above the remote Fish Glacier in the Revelation Mountains. The trip report by Simutis.

Last spring Frieder Wittmann and I spent three weeks on the south fork of the Fish glacier in the Revelation mountains. We climbed four new routes, three of them we believe to be on previously unclimbed peaks.

The first day on the glacier we climbed a peak 6905, just to the east of our landing spot. A pleasant ridge with a few rocky steps got us to the summit and the long Alaskan day still gave us some time to have a look at the other objectives in the valley. The peak was a great vantage point and we called it the Prophet for all the promises that it gave us.

After a day’s rest we picked a line on a neighbouring peak 8568 which we started calling Mephisto. The route turned out to be an Alaskan version of the Swiss route on Les Courtes. Perfect moderate neve was interspersed with a few technical pitches to keep us happy. We named our route Langstrasse for the training venue in Zurich that we used to prepare for the trip.

After some forced rest due to snowfall, we changed our sights to a rocky peak (~7350) north of the Prophet. After a few recon trips, we decided to try its North ridge. It took us a couple of attempts and we started calling it the Charlatan by the time we went up there a third time.

The final part of the ridge turned out to be more rocky than expected with beautifully sculpted granite, somewhat reminiscent of the climbing in Corsica. Charlatan pulled one last trick before the summit, when I punched through a cornice. We named the route Piled higher and deeper since for both of us this trip was a post-phd treat.

A couple more days of foul weather followed during which we scouted a potential route between the granite towers of the Obelisk peak (9304). The peak was first climbed a few years ago by Clint Helander and John Giraldo, but the southeast face above our glacier hadn’t been attempted. Using binoculars and photos we took from Prophet and Charlatan we pieced together a line of gullies cutting through the granite towers.

Our first attempt came to a halt when we retreated due to strong spindrift. After recuperating and allowing the snow to settle, we were back. A gully with good neve lead us to a series of mixed pitches that turned out to be the crux of the route and we had to aid through a couple of sections. After the mixed part, a snow ramp led us to a pitch of ice which looked deceivingly fat but its bottom part started disintegrating as we were climbing it. The remaining slopes went smoothly and we were soon brewing coffee on the summit as the sun was starting to hide behind other peaks.