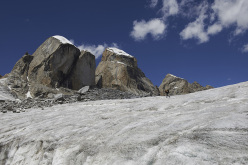 Cyrill Bösch crossing the Takdung glacier below the Lotus and Neverseen towers. Splitter and Storm (500m, TD 6a), tackles the SE Face of Lotus peak and was first climbed by Cyrill Bösch, Elias Gmünder, Arunas Kamandulis and Gediminas Simutis on 24/08/2014.
Photo by Elias Gmünder 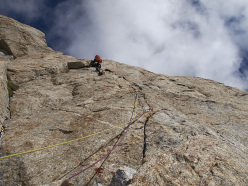 In August 2014 an expedition comprised of the alpinists Cyrill Bösch, Elias Gmünder, Arunas Kamandulis and Gediminas Simutismade the first ascent of Splitter and Storm (500m, TD 6a), a new route up the unclimbed SE Face of Lotus Tower, Miyar Valley, India. The report by Gediminas Simutis.

This August and September our Swiss - Lithuanian team comprised of Cyrill Bösch, Elias Gmünder, Arunas Kamandulis and myself visited Miyar Valley in the Indian Himalaya. After acclimatizing by climbing a new variation on Toro peak close to base camp, we set our sights at the upper Takdung glacier with hopes of climbing the southeast faces of Lotus and Neverseen peaks.

While Miyar valley has been a popular climbing destination for more than twenty years, only two groups have climbed in Takdung glacier, namely the Italians in 2008 and Americans in 2013, who gave us the tip-off about the good looking unclimbed faces. Both the Lotus and Neverseen peak have been climbed from the neighboring Chhudong valley, with the latter having a handful of established routes, yet the faces from Takdung had not been done.

With this in mind we hiked up to Takdung in deteriorating weather. After a few days of waiting we woke to a clear night and started the approach to Lotus. After a few initial easy pitches, beautiful granite unfolded with splitter cracks linked by fine face climbing. By the time we reached the summit, the clouds were closing in again. Rappelling in a heavy downpour of rain, snow and all the water phases in between, we were happy to have slipped in through this short window of opportunity. We called our route Splitter and Storm (500m, TD 6a). By the time we reached our tents, we were already scheming about climbs for the next weather window.

Since the rain fell continuously during the following weeks, our plans never materialized. We made another approach to Takdung, just to get chased away by a snowstorm. On our last day at basecamp, we got a half-day of good weather which allowed us to make a dash on another new variation on Iris peak, low in the valley.

Although we did not carry out all the plans we had, we departed content with what we had achieved during our trip.