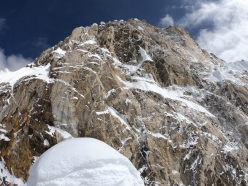 The North Ridge of Latok I
Photo by Alexander Gukov / www.mountain.ru 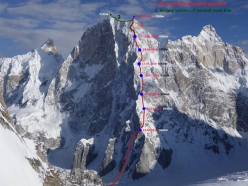 New details have emerged in English about the ill-fated Russian expedition to Latok I that resulted in the death of Sergey Glazunov and the dramatic rescue of his climbing partner Alexander Gukov. In this report Gukov believes they reached the end of the North Ridge.

The Russian website www.mountain.ru has now translated the detailed report written by Alexander Gukov about the tragic Latok 1 expedition. Gukov states that after having started climbing on the 13th of July, he and Glazunov were finally poised for their summit push 10 days later. Ten days during which, we might add, they dispatched with difficulties no other team had breached previously.

After having eaten their last of their provisions they set off early on 23 July, importantly without bivy gear, and made slow progress upwards through poor weather. Gukov registered a maximum altitude of 6,980m at 14:40 before his tracker turned off due to low battery, and at 16:00 he realised they might not make the summit. They proceeded nevertheless and at 19:00 Glazunov, who was in the lead, climbed up a small col between a rock and a snowy serac and exclaimed they had reached the summit of Latok I. He descended immediately and the pair made their way through the dark down to their tent.

While Gukov cannot remember details of July 24, prior to continuing the descent on 25 July he recalls discussing summit doubts with Glazunov: "I remember that the weather was good when we woke up. I remember sharing my doubts with Sergey as to whether we’d actually been on the summit. I am still in doubts today." he wrote on explaining further "Perhaps someone would bend the facts and say that he had been there, but not me. I did not feel the summit, I don't remember the pre-summit ridge, we did not stand together and hug one another and enjoy ourselves on the summit as I dreamt to. I think that it was the top of the North ridge or the western "summit" of Latok I. Although I can now see on Google Earth that there was only 360m from that point to the main summit with a small height difference but we did not see this in the fog. Sergey and I decided that we would not lie. He believed it was the summit, I believed it was not. We didn’t have a second chance to check it. If we had taken the tent and stayed there on the "mushrooms", we would have found out. But we did not take it."

Glazunov fell to his death a few hours later while abseiling at circa 6340 meters, while Gukov was eventually plucked off the mountain thanks to a daring helicopter rescue operation six days later.

Gukov concludes "I do not know if it was the summit of Latok I or not, I think it was not. But to be honest, it does not matter to me whether we climbed this 360m summit ridge or not. I am sure that we climbed the North ridge up to the top. It was a good climb. We did it by working in turns, replacing one another. We made a good team with Sergey despite the fact that we worked together for the first time. You were a good person, Sergey! I’m very sorry that it all happened at the descent, when most of the work had already been done. Please forgive me if I did something wrong."