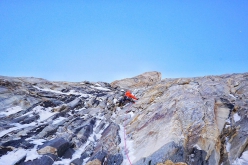 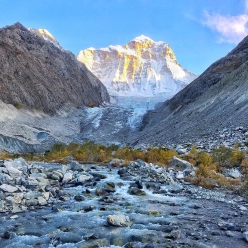 Koyo Zom (6877m) is a beautiful mountain in the Hindu Raj range in Pakistan. 'Like a medieval castle in the wilds of Asia, it’s bulk looks out towards Afghanistan and Tajikistan'. Its unclimbed west face was first ascended by Tom Livingstone and Ally Swinton
Photo by archive Tom Livingstone 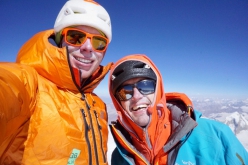 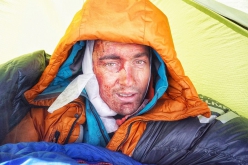 British mountaineers Tom Livingstone and Ally Swinton have climbed the virgin west face of Koyo Zom (6877m), the highest mountain in the Hindu Raj range in Pakistan. The two were part of a greater expedition including John Crook, Uisdean Hawthorn and Will Sim.

At the start of September a highly experienced British expedition comprised of Will Sim, Ally Swinton, Uisdean Hawthorn, John Crook and Tom Livingstone travelled to the Hindu Raj range in Pakistan with the aim of establishing a new route in alpine style up Koyo Zom, at 6877m the highest mountain in the range. First ascended in 1968 by an Austrian expedition led by Albert Stamm, the huge bastion has been rarely climbed since, mainly because this area was off limits due to decades of unstable political climate.

After reaching base camp the mountaineers acclimatised properly then, with seven days of provisions, split into two teams: Crook, Hawthorn and Sim endeavoured to climb a route up the lefthand skyline, while Livingstone and Swinton planned to attempt the righthand skyline up the mountain’s virgin west face.

While Crook, Hawthorn and Sim spent five days unsuccessfully attempting a new line up the NE buttress, Livingstone and Swinton were more lucky as they managed to forge a line past some extremely testing climbing to the summit over five intense days. After a first bivy above a snowfield they progressed on day two past steep mixed chimneys and corners to a narrow snow ridge where they bivied for a second night. Day three dawned with the headwall looming above, but throughout the course of the day they somehow managed to continue upwards. Livingstone described this crux as follows "I hadn’t expected us to make it through the headwall, and we’d been granted a subtle weakness through to the upper part of the mountain. This is alpine climbing at its finest."

At this point they chopped a small ledge into the snow for a third bivy while the next day, slowly worn down by the altitude, they followed easier ground. The summit was reached the next day, at circa 13:00 on Saturday 28th September after five days on the mountain. "It had been one of the best, most enjoyable alpine routes I’ve ever climbed" explained Livingstone.

Eager to get off the mountain the duo descended down the eastern flank, via the route used by the first ascentionists and this proved significantly quicker than abseiling back down the steep west face. They pitched their tent on the Pechus glacier in order to make the 6km long, 2300m descent back down to base camp early the next day and it was on the 6th day that disaster almost struck: at an altitude of about 5900m Swinton fell circa 20m into a crevasse and, although he miraculously survived, he nevertheless sustained serious head injuries. Livingstone managed to pull him out of the crevasse and send an SOS to Garmin InReach, which was relayed to the rescue services, and after what seemed like an eternal night nursing Swinton a rescue helicopter arrived at around noon the next day and airlifted them to safety.

The rescue mission proved complicated, too, as due to miscommunication the pilots initially believed the British mountaineers to be at 3500m. As a result the first helicopters returned to their base and lighter, more powerful Ecureuil helicopters were deployed early the next morning. A makeshift fuel depot and helipad established by the local army at the mouth of Yasin Valley enabled the helicopters to refuell and the pilots quickly located the climbers. However, despite 7 attempts the pilots failed to land in the strong winds and were forced to return and refuel before making a second attempt. This proved successful as the winds had abated and, importantly, Swinton and Livingstone had moved 100m to more open ground. Swinton was evacuated first, and the helicopters then returned for Livingstone.

Writing after the ordeal, Livingstone - who was recently awarded a Piolet d’or for his ascent of Latok 1 last summer with Slovenians Aleš Česen and Luka Stražar - stated in no uncertain terms: "This leaves me in a dilemma. I count alpinism as one of the coolest, hardest, most unforgiving yet rewarding types of climbing. I hold myself to high standards and ethics. I want to climb high and free. I have echoed others’ comments in the past about these standards: ‘if you get frostbite on a route, you lose. If you get rescued on a route, you lose.

And yet I want to remember the route Ally and I climbed, one of the best I’ve ever done, and up until the rescue, one of the highest highs. It felt so cool to be on the summit, feeling like we were on the Moon. But I have to hold my word and say we got rescued. We ultimately lost by those terms. Accidents just happen in the mountains - sometimes you’re lucky and sometimes not. The main thing is that we’re both safe and well, and we had an amazing adventure. Nothing else really matters, despite the above."