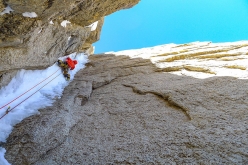 Greg Boswell making the first ascent of Beastiality up Bears Tooth, Alaska, together with Will Sim
Photo by Greg Boswell, Will Sim 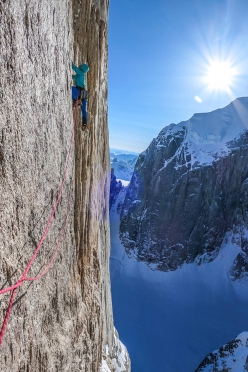 Greg Boswell and Will Sim climbing in Alaska, above the Buckskin Glacier
Photo by Greg Boswell, Will Sim 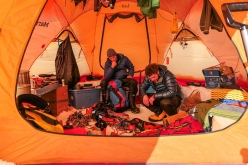 Greg Boswell and Will Sim in Alaska, on the Buckskin Glacier
Photo by Greg Boswell, Will Sim 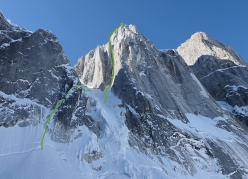 In April 2017 Greg Boswell and Will Sim made the first ascent of two big new alpine climbs in the Central Alaskan Range: Beastiality up Bear's Tooth and Shark Fishing on a mountain on the opposite side of the Buckskin Glacier.

Last month the expert British alpinists Greg Boswell (26) and Will Sim (27) travelled to the upper reaches of the Buckskin Glacier in the Central Alaskan Range where, during an exceptional spell of good weather, they made the first ascents of two big routes. The first is called Beastiality and takes a breathtaking and line up the South East face of the Bears Tooth , while the second is called Shark Fishing and is potentially the first route up the mountain opposite Bears Tooth. With Beastiality being described as "world-class" and Shark Fishing we decide to check in to find out more.

Greg, how did this Alaska trip come about?

To be honest, I have been wanting to go to Alaska for a few years now, I nearly sorted a trip back in 2014 but it fell through. I went this year literally because I got an out of the blue Facebook message from Will earlier this winter asking what I was up to in the spring, and if I wanted to go to Alaska? I said I was keen and we booked flights. It was that simple.

What did you expect?
I was expecting big scary mountains and very cold temperatures! I had prepared myself to suffer a fair bit whilst on the glacier but the thought of climbing on such immaculate granite faces made it all worthwhile. We were going out with very open minds as to what we would climb. We had one real objective, but we would’ve been happy to just get a load of climbing done regardless of routes or locations.

This was your first time there. What didn't you expect?
I wasn’t expecting to get the unbelievable weather that we encountered whilst on the glacier. We were super lucky to get wall-to-wall sunshine for the 15 days that we were on the Buckskin. The temps were cold but never so cold that you wished you weren’t there! The bivouacs high on the routes were so peaceful, out of the glacial wind that came every night whilst at basecamp.

So tell us about the new routes
Our main objective for the trip, despite having very few thoughts of success, was a breathtaking line up the South East face of the Bears Tooth above the Buckskin Glacier. Will had some info from a friend who'd attempted a line to the left of our intended route back in 2006, but in reality we knew very little about our objective. We followed in most part the huge couloir system that cut up through the steep face, but we were forced right onto the granite wall twice due to poor and dangerous rock in the lower chimneys. We eventually regained the steep icy runnels and followed these to the summit ridge, which we ascended for another 300m to the summit of the Bears Tooth. We called the 1400m, 30 pitch extravaganza Beastiality and believe it was home to some of the best pitches of granite mixed climbing that either of us have done. World-class!

This was then followed up with another climb
Yes, our second route of the trip was a line we had spotted whilst climbing on the Bears Tooth. It was an obvious line straight up the smaller face on the opposite side of the glacier. Despite being a shorter line, the route was very sustained with hard climbing all the way. It was a mix of steep and bold snow/ice runnels and perfect mixed chimneys in its upper half. We climbed until 11:30pm on the first night and had a cold bivi on a steep snow patch below a cool shark shaped boulder. The second day was short lived with only a couple more mixed pitches before reaching the immaculate alpine ridge that led to the summit. We called the route Shark Fishing due to the fact that when we were hauling the leaders pack, the second had to assist by pulling on the haul line to free the bag from the overlaps and chimneys. We laughed and joked that it was like trying to reel in a huge struggling shark, plus as the bivi was under the shark shaped boulder, it felt like a fitting name.

How independent are they?
Both routes are fully independent with Beastiality taking the huge right-hand couloir system beside the route (attempted line) of House of the Rising Sun. But we took a very different approach to reach the main wall as we didn’t want to climb the dangerous icefield below. We climbed the mixed couloir to the left of the seracs. Shark Fishing is potentially the first route up that mountain (still waiting to get conformation), so you don’t get much more independent than that.

What about about the style of ascent and their overall grades or difficulties?
We freed both lines, climbing and working out all our wrong turns and problems as we came to them, it was an awesome adventure! We rapped the lines to descend, mostly V-threads where we could or trad pieces. No bolts. As to the grades: we didn't give the routes overall grades, all we did was state: Dry, Mixed and Ice at the highest level! We felt that anyone looking to climb either route in such a location should get the full adventure of finding out what the climbing is like as they move through the route, as we did. Also the routes may change so much that a specific grade might not be relevant in icy years or dryer seasons. At least people now know the lines are doable and where to go rather than finding dead ends like we did on a couple of occasions.

How much gear did you take with you?
We took basically just enough so that we didn’t have to start rationing our food during the ascent. Two bagels a day each, one for breakfast and one for during the day, and a freeze dried meal for the bivis. Then just the usual, half a mat for sitting on and a sleeping bag, stove and two small gas cans. Plus, climbing gear and down jackets. We were hauling one bag due to the nature of the technical climbing, so it felt OK having full bags.

4 days were spent on Beastiality - that's quite a push out in the mountains! Is there anything you wouldn't do again?
Yeah 4 days… it was nice to spend the time and nice weather days on the mountain. The style we climbed that route in worked out fine so we adopted the same tactics for our second climb. So no, I’d probably say there’s nothing we would change. It all worked well.