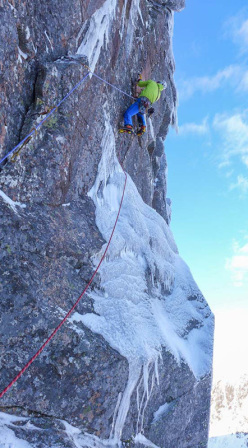 At Creag an Dubh Loch in Scotland Greg Boswell and Guy Robertson made the first ascent, onsight, of Range War  X/10. This is only the second route of this difficulty to be ascended in this style, after their The Greatest Show on Earth at Cul Mor.

A mere four days after making what is believed to be the first onsight ascent of a grade X/10 winter climb in Britain, Greg Boswell and Guy Robertson have doubled their takings with the first winter ascent, onsight, of Range War (X,10) on Creag an Dubh Loch in Scotland.

Range War is a difficult, rarely repeated summer climb graded E4, first ascended by Kenny Spence and Duncan McCallum in July 1983. The highly exposed, three-pitch outing climbs had been known to be a possible winter line, a very good and hard modern day mixed adventure for future generations and Boswell had made the long approach to the cliff seven times during the last three seasons, only to turn back or climb alternative routes as conditions were never ideal.

On Thursday 22 January however things proved different and after wading through knee deep powder, fighting against the crust and walking along the icy surface of Loch Muick, Dubh Loch was finally in full winter condition. Robertson led an alternative winter start to the left of the summer line that took the pair to the first belay. Boswell then proceeded to lead the 35m second pitch, at British 6a (Font 6A+) the crux of the line with a long series of extremely tiring, highly technical moves.

Writing on his blog, Boswell stated "The route’s steepness was deceptive and although the niche wasn’t as steep as the lower wall, it was still very overhanging. I fought to get some gear in and try and de-pump my now burning forearms. Deep Egyptians and contortions were tried to relieve my arms, and finally, once I had scoped what looked like the way to sanctuary, I powered on through the steep capping roof of the niche to gain a wild and astonishingly exposed position on the overhanging arête. Hundreds of meters of cliff dropping away below me with nothing but air between me and the corrie floor. This is a memory that will last a lifetime!"

After reaching easier ground, Robertson seconded the pitch and then led the third pitch in worsening conditions. The two descended safely and made the long return to the car. The winter ascent of Range War has been graded X,10, just like The Greatest Show on Earth at Cul Mor.

Simon Richardson of Scottish Winter put these climbs succinctly into context by stating "Two new Grade Xs in the space of four days significantly raises the bar, and in response, the small but tight-knit world of Scottish winter climbing world has collectively gasped in astonishment."