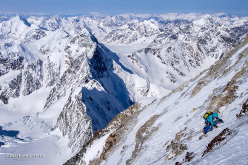 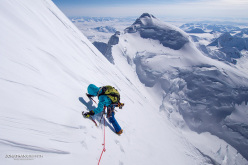 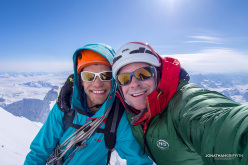 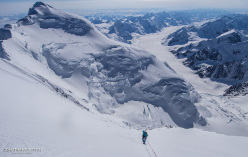 British alpinists Jon Griffith and Will Sim have made the first ascent of Bad to the Bone, the first route to climb the NW Face of Mt Deborah in Alaska.

Over three days this April British alpinists Jon Griffith and Will Sim made the first ascent of the NW Face of Mt Deborah, the 3761m high peak in the eastern Hayes Range of Alaska. First climbed in 1954 via the South Ridge by Fred Beckey, Henry Meybohm, and Heinrich Harrer, this mountain has a reputation for huge difficulties and, understandably, a lack of previous ascents and after previous trips to Denali, Hunter and the Ruth Gorge, this ‘out there’ feel on enormous unclimbed faces is exactly what the two were looking for.

Griffith and Sim identified the pyramidal face using Google Earth and flew in to Mt Deborah by helicopter. As it happened, their expedition was grounded before even starting due to a heavy storm destroying base camp and the first two days transformed into “pure survival” while they desperately dug a snowhole which would act as their shelter for the rest of the trip.

When the weather finally improved Griffith and Sim carefully observed the face - which they had previously only seen the upper 1/4 of - and then set out on the 23rd of April to make their bold alpine style ascent. Two bivies were needed in total to breach the massive 2000m line and after reaching circa 2/3 height they traversed right to join up with the NW Ridge due to terrifying avalanches rushing down the face. They summited late on the 24th and spent the next day making the scary descent down a different line they did not know, namely the circa 400m high West Face to then make the long return to Basecamp. In total, Griffith and Sim had been on the for three days and while they have not provided technical difficulties, they both agree that from both a physical and mental perspective this is certainly a huge alpine outing.

Mt Deborah: was this your original objective? And what attracted you to it
Will:
Yes a new route on one of the northern aspects of Deborah was our main objective. Mount Deborah is a big pointy mountain with a gnarly reputation. Windy weather, terrible rock quality, difficult access and a very isolated location make it a pretty full on mountain to get up by any route.
Jon: It’s a very attractive looking feature on a beautiful mountain, but the find was all down to Will - he’s good at scouring for interesting lines. In fact the find was just based on a photo of the top 1/4 of the face and hoping that the other 3/4 would go so it wasn't until we actually arrived at the base that we were able to try and scope out a line or even see if it was climbable.

Just the two of you? How did you get there and how 'out there' did it feel?
Will:
We used a helicopter to get on to the Upper Gillam glacier. We originally planned on flying in using a small ski plane but due to a very low snow year amongst other factors it would have been hard to get dropped close to where we wanted to be. By using the helicopter we managed to set up basecamp in a good location.
Jon: There’s definitely a very different feel to the Hayes than the Central Alaskan Range. I think because we had to use a helicopter it felt just that little more cutoff. Plus you don't see a single person out there of course, there isn't any wildlife at all (there are plenty of thieving birds all over the Central Range as everyone knows!). If the sat phone broke I’m not sure how you’d get out to be honest!

Three days on the mountain. Did you expect to take this time? And how light did you go?
Will: We anticipated three or four days. Mainly because the descent was a big question mark. We had to descend the West Face in to a different valley then climb up on to a ridge which we downclimbed for about a mile before making a series of rappels back to the valley our BC was in. In the end it worked out, but we didn't know how long that would take.
Jon: As soon as we arrived at our Base Camp we got slammed by a really nasty storm - hurricane winds that made Patagonia look pretty acceptable. That definitely added to the wild feel of the mountain and gave us food for thought about our climbing strategy. To be honest we just weren't sure how long we were going to take - the route up and down the mountain is so huge, with plenty of bits we couldn't see, that it was a rough guess at best. We also had a very tight weather window so anything longer than 4 days was going to land us in a storm up high which wasn't something either one of us wanted to experience. So either way I think we both knew that if we were going slow we were just going to have to keep single pushing that third day until we got off the thing.

“Bad to the bone” - the name gives a good idea about what you endured.
Will: We called it "bad to the bone" because the face and the mountain generally had a really serious feel to it. Kind of the antithesis to the neve and splitter granite of the Central Alaska range. Also, when we were sitting in BC after having climbed it, we were drinking whiskey and staring at the face when the song "Bad to the bone" came on the MP3 player and it seemed to fit! I think the worst surprise of our trip was when our Basecamp tent was destroyed in a storm on the first night after getting on to the glacier. We spent two days in Basecamp just trying to survive the weather until we managed to shelter in a snowhole that we stayed in for the remainder of the trip. It wasn't until day four that we could dig out our destroyed tent containing all our food and gear.
Jon: Ha! Well the face is a pretty gnarly place. We spent a day watching it as the sun hit the previous day to our ascent to see how it reacted and it seemed completely still which was reassuring. The following morning we had two pretty big slides that came down either side of us when we were at the Bergschrund and we were so close to just calling the whole thing off. In a way the face feels safe as there are no huge seracs on it, but there are thousands of hanging mushrooms and big cornices that give it a really daunting feeling. Really daunting. Higher up the face the sun swung round and this time it erupted - I don't know why it hadn't the day before, it’s a mystery. But nevertheless the face started streaming really big slides that definitely past the point of just being ‘spindrift’. For that reason we abandoned our direct line at the top and just traversed out of the face as fast as possible. It was a bit scary to be honest, I think we got lucky that we were off the lower slopes and hadn't committed to the upper couloir yet when all hell broke loose. Nevertheless we still got hit by some big slides and I definitely remember offering the traditional ‘if we get off this mountain I’ll never climb again’ prayer on one occasion!

Tell us about the descent
This was really scary - it is ringed by huge cornices. Plus we felt like there was not going to be any ice under all the snow (we were right), and the rock is seriously rotten. So it left quite committing rapping down this face without knowing if the raps would actually enchain or we’d just get stuck. After the first few it felt a bit better and we could have ended up down climbing it, but we were pretty worried about the snow pack and these huge cornices everywhere overhead.

The whole enterprise sounds extremely committing
Jon: I think people get a bit too obsessed and bogged down in numbers without looking at the greater picture. The North side of Deborah isn't a granite mountain- it doesn't form obvious goulottes and pretty M6 corners like you get in the central range.. There is no ‘line’ as such because thats not how the rock on that mountain works- instead you have to just follow your nose and keep hoping that you can link weaknesses through the face. As luck would have it we just managed - and there were times where it looked like we were going to get shut down. As soon as you get on rock its a nightmare - it’s not about being bold or anything, you just cant climb this stuff. You’re forced to simul climb 95% of the route as the belays are far and few between - simul climbing thin tenuous terrain with only a couple of bits of pro between you whilst the mountain starts to rain down collapsed snow mushrooms isn't really something you can put in to a numbered grade if you see what I mean.

So how would you sum it up?
Jon: Overall it’s a pretty huge route, you get a really good alpine experience on this mountain. I think the route itself is easily over 2000m, and the descent was huge, complicated, and very dangerous as well. I don’t think I’d recommend it! Nothing was certain until we got off the mountain - we didn't know if our descent would actually work and retreating back down the face would have been incredibly hard I think (very thin ice and useless rock). We had started out with the idea of doing something a bit smaller and lower than on our two previous Alaskan trips - something more technical but less stressful and scary. Somewhere along the line that changed though and we ended up on Deborah. It’s kind of special to open up such a huge face on such a beautiful peak.