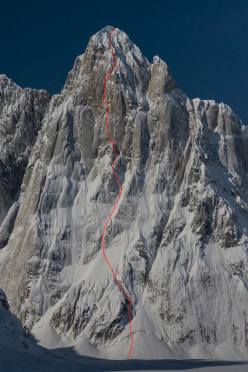 Moose's Tooth in Alaska: David Lama and Dani Arnold fly up their Bird of Prey

Alaska again: after the recent great start to the season on the Citadel in the Kichatna massif by Ben Erdmann, Jess Roskelley and Kristoffer Szilas, now it's the famous Moose's Tooth in Denali National Park which has made headline news thanks to remarkable "Direttissima" up the East face which has all the ingredients of being something truly special. The new line, called Bird of Prey, was forged by Switzerland's Dani Arnold and Austria's David Lama who in 48 hours and with one bivouac climbed a direct 1500m high route up the centre of the face past difficulties up to 6a, M7+, 90° and A2 aid.

On 10 April the duo were dropped on the Buckskin Glacier, in the heart of Alaska, by the air taxi and Arnold and Lama immediately set to work studying the face: with no specific goal in mind, the untouched headwall seemed to good to miss. Wasting no time at all they set off at 2am on 12 April and reached the base of the wall. Despite the extreme cold, conditions were perfect. "We both had pretty much the same idea about what we could climb unroped" explained Arnold, adding "and that's why we were very fast in particular on the lower section." Fortunately the sun came out right as they reached the first difficulties, but nevertheless the two had to battle hard to overcome the sections of thin ice and steep mixed terrain (up to 90°). These real "obstacles" slowed them down considerably and the two often had to resort to making wild pendulums in search of a feasible way upwards. Then, at about 21:00, they reached a narrow ledge and pitched their tent for the first, uncomfortable, bivouac. This was going to be the only bivy, but at the time they had no way of knowing this...

At dawn Arnold and Lama set off on another day full of technical, and psychological, difficulties in view of the long run-outs between one piece of pro and the next. As if that wasn't enough, while climbing past a large roof a small crimp broke beneath Lama's ice axe and, fighting hard not to fall off, the Austrian touch a huge snow mushroom next to him which immediately collapsed, falling directly onto their ropes. Lama somehow managed to stay put but the immense barrage of snow threatened to sever their ropes and even pulled out one of the belay pegs... This far from ideal situation was further exacerbated by some 60m pitches which had no protection whatsoever. Here, too, a fall would certainly have been fatal.

"The upper section was much harder than expected" Lama explained, adding, "We thought it would be more classic terrain (by this I don't mean in the classic mountaineering sense, but classic by our standards), but the climbing proved by no means easier than at the start of the headwall." Despite all these difficulties the two reached the summit at 18:00 and then, due to the poor weather forecast, they immediately opted to abseil down the route. They reached their camp at 2:00 am, exactly 48 hours after having set off.

It's interesting to note that, for both Arnold and Lama, Bird of Prey marks an amazing start in Alaska: despite their vast experience, neither of them had ever been to Alaska before! It's also worth noting that shortly after their ascent some new routes were added to the Moose's Tooth, of which we hope to report about greater details soon. In the meantime, this latest Lama and Arnold creation seems like a real class act... we suspect Bird of Prey won't be forgotten about in a hurry!