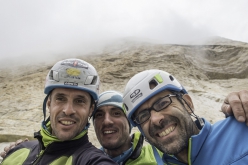 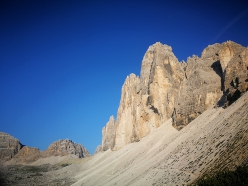 Italian mountain guides Alessandro Baù, Claudio Migliorini and Nicola Tondini have completed a new route right in the middle of the north face of Cima Ovest di Lavaredo in the Dolomites. In 2016 the three alpinists started their line to the right of the famous Via Couzy (René Desmaison, Pierre Mazeaud, Pierre Kohlmann, Bernard Lagesse 1959, first free ascent Mauro Bole 1999), then in 2018 and in 2019 they continued establishing the route ground-up, without the use of aid, with trad gear and pegs on the pitches and bolts at the belays.

Having forged 14 pitches through the yellow overhanging section and breached the large roof earlier this summer, they returned a few days ago to complete the route that now runs completely independently up to the summit apart from one belay shared with Alpenliebe (Kurt Astner, Christoph Hainz, 1998- 99).

Currently the new route does not have a name and the first free ascent is still outstanding, but the trio consider it one of the most challenging lines they have ever established. Having cut their teeth exploring difficult new terrain on Civetta, Sass de la Crusc, Cima Scotoni and Mulaz, this new route promises to be an important addition to the Tre Cime di Lavaredo. Further details will follow in due course.

01.01.2016
Gigi La Trottola, new Mulaz climb in the Dolomites by Baù, Migliorini, Zaccaria
The report by Alessandro Baù who, in summer 2015 together with Claudio Migliorini and Giovanni Zaccaria, made the first ascent of Gigi La Trottola (IX, 450m) up the west face of Mulaz, Pale di San Martino, Dolomites.