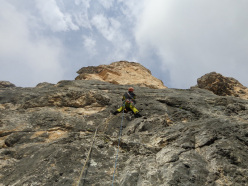 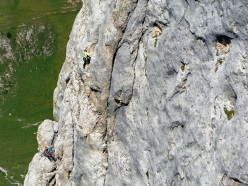 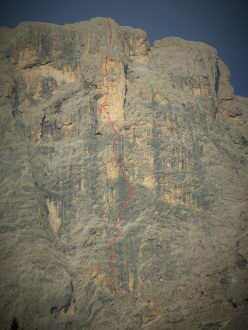 The report by Alessandro Baù who, in summer 2015 together with Claudio Migliorini and Giovanni Zaccaria, made the first ascent of Gigi La Trottola (IX, 450m) up the west face of Mulaz, Pale di San Martino, Dolomites.

Three years have passed since our first foray up the west face of Mulaz. At the time Alessandro Beber, Simone Banal and I climbed Magia Nera and, in doing so, we made what is likely to be the first repeat 20 years after its first ascent.

When I caught sight of the Mulaz face for the first time I was immediately struck by three lines: the black streak on right which hosts Magia Nera, the central line that finishes up a yellow pillar, and the slabs on the left which host the classic Pilastro Grigio route. Aesthetic lines, logical, up superb rock... and when it comes to beautiful rock, Gigi Dal Pozzo comes into play. Between 1992 and 1993, together with Venturino De Bona, Maurizio Fontana and Sandro Neri, De Bona left his mark on 5 new routes: Sbalzo Termico, Magico Mulaz, Magica Erosione, Torna a Casa Lessie and Magia Nera.

The latter is a magnificent route with a IX- section well protected by a peg. There are some VI and VII pitches where you need to "know how to climb" and above all how to protect yourself, because repeating a route on Mulaz is almost like making a first ascent, the only difference is that you already know the grade ... if you climb the same line as the first ascentionists ;-)

I’d promised myself I’d return to the central streak that hosts Sbalzo Termico, to what seemed like the most repulsive line. So after a failed first attempt due to an incoming storm, here I am again at the base of the face with Claudio Migliorini: 5 magnificent pitches up gobsmacking rock put us to the test. During our repeat we replaced (after having received permission from Venturino) two old rock bolts and freed the A2 pitch.

The difficulties then ease off and there’s time to think about the countless stories told by Ventura at Rifugio Torrani: Sbalzo Termico, that got its name due to the second attempt during which, as opposed to the first, it was so cold that neither Gigi nor Ventura wanted to try those slabs and to warm up they sprinted along the half-height ledge. I can imagine them.. what a pair! Much to our surprise we realise that the TCI guidebook was wrong and that Sbalzo doesn’t deal with the repulsive looking black streak but climbs further to the right and so… so the line that had initially struck me was free! Wow!

A few days later I'm back with Giovanni Zaccaria; we forge the first 4 pitch and I then grind to a halt on the 5th, in the middle of a slab after running it out from the belay. There’s no way to protect the moves and I bail somewhat dejected.

I return with Claudio Migliorini, fully charged, It's amazing how things have changed, the holds seem better, as does the pro; everything seems to work out for the best, apart from light drizzle that falls every now and then, even though the forecast had been for good weather! So I fall onto a Friend and, hanging off a skyhook, wait for it to stop raining with my climbing shoes wrapped into my jacket to keep them dry as I feel all the holds in the hope that I can hammer in a peg. And in the end I manage to drive in a salvation peg before gaining precious meters to reach a belay.

Claudio adds another pitch to lead us away from the vertical slabs: we now climb the yellow pillar on the left, streaked grey and red. The rock here is completely different from below, but nevertheless compact and full of pockets. We honestly didn’t expect it to be so beautiful.

I’ve only ever climbed once with Gigi, on the Monte Penna below Mt. Pelmo and remember it being a magnificent day. I cannot say I know him, but I believe that after having repeated many of his routes I’ve managed to immerse myself into his thoughts, his fears and his strengths. We decided to dedicate this route to him, to thank him for all the gems his left scattered across the Dolomites.