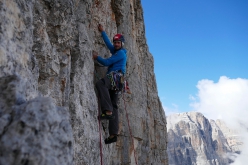 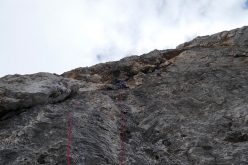 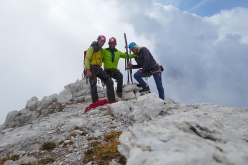 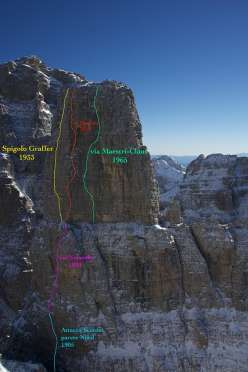 On the north face of Campanile Basso in the Brenta Dolomites Alessandro Beber, Gianni Canale and Matteo Faletti have made the first ascent of Destrani, a new rock climb located between Spigolo Graffer and Via Maestri Claus.

Destrani in our local dialect means nostalgia. I like the idea of having created a little climb in memory of an ordinary woman, Maria "Mariotta" Oss Pegorar, born way back in 1923. She’s by no means famous, simply a daughter of the twentieth century, someone though when in comes to courage and tenacity was on a par with the pilot Giorgio Graffer and the “Spider of the Dolomites" Cesare Maestri, who as of today are her guards of honor on the most famous tower in the Dolomites.

This climb can about completely spontaneously…. we all had a day off, wanted to climb together, the weather wasn’t stable enough for something longer and I had a lump in my throat, because losing a grandparent is always a bit like losing a bit of your roots.

I’d envisaged the line a long while ago, having eyed it countless times as I climbed Via Normale or ascended the Via ferrata Bocchette Centrali. Although brief, the actual climbing proved to be a lot better than expected. The rock quality was superlative and placing protection was by non means straightforward.

To make the route more friendly for repeaters, a few weeks after our first ascent our friends Matteo Faletti and Gianni Canale abseiled down the line and bolted the belays. For those wishing to climb it, we recommend a combination of routes up through the north face, starting from Bocchetta del Campanile Alto (see topo and photo). As to the gear, we recommend a full rack of Friends up to #3, plus a few micro-friends and a second set of mid-size friends. As mentioned, the belays that were protected by Friends and nuts have been bolted.

A big thank you to Matteo Faletti and Gianni Canale for having entertained us and kept us warm on the rather wert and cold day up in the Brenta Dolomites.

04.09.2014
Brenta Base Camp 3 - the new climb Attraverso il Tempo on Campanile Basso
The third and final dispatch of the Brenta Base Camp, the small 'expedition' into the the heart of the Brenta Dolomites during the Discover Brenta Dolomites event to celebrate the 150th anniversary of the first traverse of this massif. The report by Alessandro Beber and Matteo Faletti about the first ascent of Via Attraverso il Tempo (420m, VIII) up the SW Face of Campanile Basso, a new route climbed in August 2014 together with Alessandro Baù and Matteo Faletti.