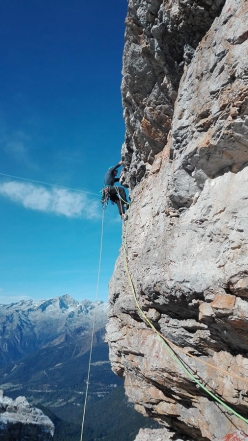 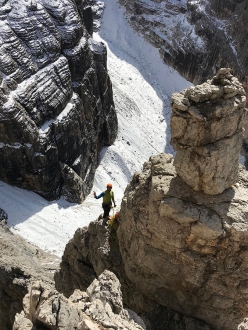 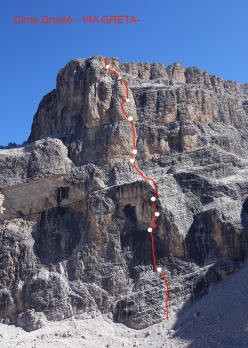 Francesco Salvaterra and Nicola Castagna have made the first ascent of Via Greta, a new multi-pitch rock climb up the South Face of Cima Grostè in the Brenta Dolomites.

Last August I suggested to Marco Burrini, a client and good friend of mine, we repeat Via Marco Burrini up Cima Grostè. I wanted to go for this route because, strangely, I’d never actually climbed anything on this face before, despite its fame and easy access.

After a few pitches I couldn’t help but notice the nice compact pillar that runs to the right of the route, in particular I was struck by the reddish prow that starts in the middle of the face. On that occasion, at each belay I tried to traverse outwards to see if there were any signs of other routes but… nothing!

I was taken in by the idea of climbing something new and so in autumn my friend (and now mountain guide) Nicola Castagna and I started up the line we had envisaged. A series of storms and also the arrival of snow slowed progress, but after a few half days of effort we completed the route. In mid-October we placed the last peg. The first repeat (as well as the first free ascent) didn’t take long, as was made by Franco Cavallaro and Gianluigi Leonardi at the end of October with temps down to 2°C!

What can I say? The line fully met our expectations, every pitch is beautiful and generally speaking up good rock. Moreover the route follows a line of natural weaknesses, we followed the easiest way though the difficult. The initial idea had been to equip all belays with bolts, but given the ease (and fun) of using only pegs, we opted for the latter. In any case the belays are all very well equipped, mostly with 3 or 4 pegs, while the most challenging sections on the pitches can be protected well but cannot be aided. It’s a route for those at ease on grade VI climbing.

When it came to giving the route a name I asked Nicola to wait, my partner Chiara was pregnant and I wanted to dedicate the line to the little girl that was about to be born. Who knows, maybe in a few years I'll have the pleasure of accompanying Chiara along with Greta on her climb!