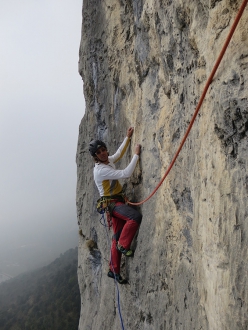 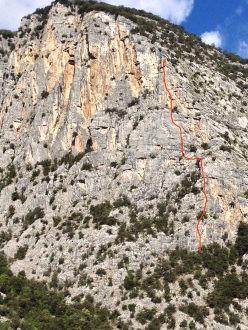 The report by Marco Bozzetta who, together with Francesco Salvaterra, made the first ascent of Pace in Siria (7a+, 6c+ obligatory, 230m), a new multi-pitch rock climb up the SE Face of Dain di Pietramurata, Valle del Sarca, Italy.

After having climbed extensively in the Sarca valley for the last thirty years, I’ve examined and climbed its steep rock faces lots of times and stopping by the side of the road to peer through my binoculars had become a fairly common occurrence. In fact, at times it was my wife who forced me to stop the car and reproached me, as she said that sooner or later I’d end up driving off the road!

Of late my attention had been captured by Dain of Pietramurata and every time I drove through the Sarca Valley I couldn’t help looking up at the beautiful shield of limestone slabs on the righthand side of the face, above the motocross track. I leafed through the guidebook Pareti del Sarca compiled by Diego Filippi and noticed that no route tackled the central slabs, where the rock appeared to be compact and clean, and so I thought a new route might go immediately to the left of Via Genoma, a route I’d climbed during the mountain guide’s course a few years ago.

I wasn’t sure whether there’d be sufficient space for a new line, in fact it seemed unlikely that no one has thought of it previously, so in November 2015 Francesco Salvaterra and I went on a reccie and climbed the route to the left, Impronte digitali. As we climbed this I kept examining the project and after just three pitches I realized there really was enough space for an independent line!

"Francesco, lets rappel immediately, get the gear and start immediately!" We were so excited we didn’t even finish the route we were climbing. That day we cleaned and bolted the first pitch, and a few days later we added another three, up incredible rock past elegant and highly rewarding climbing.

Winter approached and the start of our main work season halted further progress. This April we were back on track and after a further two days we completed the route. Francesco was overjoyed and two days later we returned to free the pitches, as happy as a kid in a candy store. Did you see that goutte D'Eau? And that traverse? You have to smear there… and so we spent another beautiful day on the face, consolidating our friendship, full of enthusiasm, living out our newest vertical adventure. Placing the summit register on the penultimate pitch was almost a touching moment.

The route is called Pace in Siria, Peace in Syria, and I chose this name in order to remember the countless wars that are being raged throughout the world, with sadness and also in the hope that the Syrians can find the peace they deserve, regardless of race and religion.