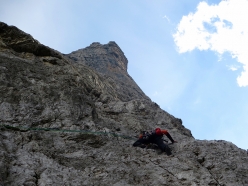 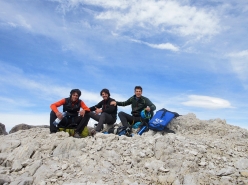 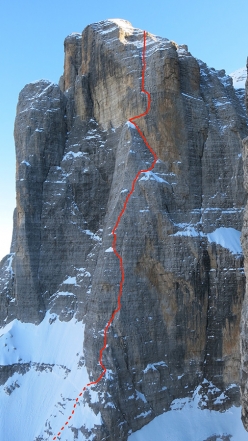 On Cima Tosa in the Brenta Dolomites (Italy) Paolo Baroldi, Filippo Mosca and Francesco Salvaterra have established Pilastro Nord, a new 700m rock climb that completes and attempt carried out in 1981 by Gianni Giudicati and Piercarlo Berta.

What does a new climb represent? A mix of emotions, a profound urge to explore, a physical and psychological test, a bundle of laughs, a way of reading a great rock foce by interpreting its natural lines.

Cima Tosa is a huge peak in the Brenta Dolomites, whose rock is steeped in history, and on this we found all this and more, just like Gianni Giudicati and Piercarlo Berta who attempted this line over three decades ago.

We chose to climb without feeling rushed, savoring every minute in this stern and beautiful environment, resolving the riddle as one used to do in the past: in a single push. In our modern world that constantly imposes needs we don’t really need, that provides a “safety net" that turns out to be exactly the opposite, we decide to place our trust in our collective experience and remove all the unnecessary from our haul bags. Two sleeping bags, a rack of pitons, some salami sandwiches and the luxury of a can of beer, what else do you need?

The result is Pilastro Nord, North Pillar, a large, varied and elegant outing. Although it might not become a classic climb in the Dolomites, we nevertheless hope someone will repeat it because it really is worth the effort!