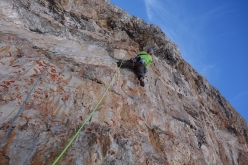 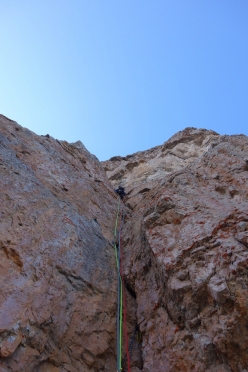 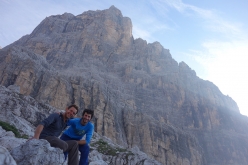 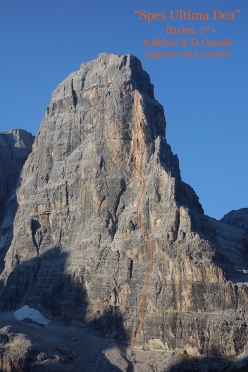 The memories begin to fade, but if I'm not mistaken things went roughly as follows... In August 2012 we’d placed to climb Via Emi up Castello di Vallesinella but right at the last moment Franco Cavallaro, with whom we wanted to climb, couldn't come… so with Gianni Canale, aka the force of Nature we suddenly had time on our hands!

A while back I’d noticed an interesting looking line up Crozzon di Brenta, but it seemed highly unlikely that it hadn’t already been climbed so I decided to check out for myself. We knew about other routes nearby, such as Via del friend perso and Los Angeles, but we didn’t have detailed descriptions about where they went.

On that day we climbed seven pitches without encountering any in-situ gear. The rock was fantastic and the difficulties OK, and as we rappelled we were all smiles. Not even a month later we were back at the base of the climb, poised for another attempt. This time though we came across a couple of pegs and a hex stuck in the next two pitches (even now we don’t know what they belong to), but nevertheless we decided to push on, up to the magnificent yellow pillar above us.

Things became more serious here, but with a bit of luck we managed to steer our way past a couple of spectacular traverses and through the steepest section of the face.We now knew that one more day would suffice to complete the route, but autumn arrived, bringing the climbing season in the Brenta Dolomites to an abrupt end.

For some reason in 2013 we failed to meet up, as in 2014… and even 2015 we had no luck. The route on Crozzon though played in the back of our minds but after all those calls to Gianni, I realised it’d be easier to make a deal with the devil. The few moments when we were free from work or family commitments were never the same. But in 2016 we solemnly promised we’d team up before the end of the year, and we did so in late September: four years after we first started the route we finally completed it, proving that one must never give up hope!

We returned in summer 2015 to enjoy the route, repeat it and free some of the remaining pitches as we’d resorted to aid on some sections during the first ascent. Our patience was rewarded fully because the climb is a stunner: varied, with continuous difficulties throughout, not too difficult and not too easy, up "titanic" rock, as Gianni would say.

That two central pitches where we’d stumbled across some in-situ gear could have modified and avoided with variations, but in the end we decided to follow what we believe is a logical climb, up the most obvious line from the bottom to the top.

We wish repeat ascentionists plenty of fun and we would like to the Rifugio Casinei hut wardens Corrado & Pia and the entire Leonardi family from Rifugio Brentei for their wonderful hospitality!

Alessandro Beber thanks his sponsors SCARPA, Millet and Rock Empire

LINK: See all the climbs in the Brenta Dolomites in the planetmountain.com database

04.09.2014
Brenta Base Camp 3 - the new climb Attraverso il Tempo on Campanile Basso
The third and final dispatch of the Brenta Base Camp, the small 'expedition' into the the heart of the Brenta Dolomites during the Discover Brenta Dolomites event to celebrate the 150th anniversary of the first traverse of this massif. The report by Alessandro Beber and Matteo Faletti about the first ascent of Via Attraverso il Tempo (420m, VIII) up the SW Face of Campanile Basso, a new route climbed in August 2014 together with Alessandro Baù and Matteo Faletti.

22.08.2014
Brenta Base Camp #2 - two new routes up Punta Jolanda
The report by Alessandro Beber and Alessandro Baù about two new rock climbs on Punta Jolanda: Prua degli Onironauti (250m, VII) and Badanti al seguito (220m, VIII), established on 04/08/2014 together with Matteo Baù, Fabrizio Dellai, Matteo Faletti and Claudia Mario. The second report of the Brenta Base Camp, the small 'expedition' into the the heart of the Brenta Dolomites during the Discover Brenta Dolomites event to celebrate the 150th anniversary of the first traverse of this massif.

14.08.2014
Brenta Base Camp #1 - meetings, new climbs and lightening bolts
The first report of the Brenta Base Camp, the small 'expedition' into the the heart of the Brenta Dolomites during the Discover Brenta Dolomites event to celebrate the 150th anniversary of the first traverse of this massif. Alessandro Beber reports about Scintilla (450m, VIII), the new climb up the East Face of Brenta Alta first ascended together with Simone Banal, Alessandro Baù and Claudia Mario.