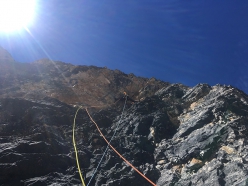 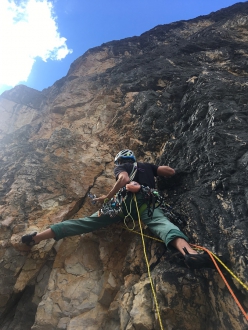 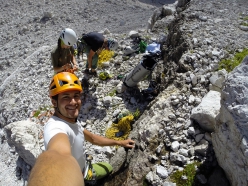 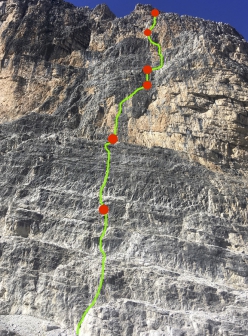 On Castello di Vallesinella in the Brenta Dolomites Giorgio Pirovano, Nicola Castagna and Sara Ongari established Agrodolce, a new 6-pitch rock climb first ascended ground-up, onsight, with bolts only at the belays and difficulties up to grade VII.

During one of our climbing trips in July 2016 my friend and partner Nicola suggested we go and check out a line he’d noticed on Castello di Vallesinella. I immediately said yes, and so on 13 July we geared up at the Grostè cable car parking lot. Sara Ongari tagged along on what was a new adventure for all of us; we’d never established a new route in the Dolomites and we planned on doing so onsight, trad, leaving as little gear insitu as possibile. The only condition we set ourselves was bolts at the belays.

We felt both joy and sadness, because the night before two friends had had a very serious accident: hence the name “Agrodolce”, bittersweet. Once at the base of the wall we began to stay the line. We were a bit unsure about where to go, especially from about the third pitch onward. Quickly though we dispatched with the first two pitches and thanks to the excellent rock quality Nicola found a perfect line to complete the hardest pitch of all. I then took the lead but unfortunately, after another pitch, we had to call it a day. Work called so we descended. We didn’t leave fixed ropes as we wanted to reclimb the pitches and get a better idea about the grades.

We both didn’t want to leave this as an open project and so on 18 July we returned. We quickly reached out previous highpoint and at 13:00 we found ourselves under an inviting corner: the prelude to what would become another two superb pitches. It was my turn again. I climbed the corner, then breached an overhang that led me past the difficulties. My partner established the last pitch that led us to the top, happy to have completed the climb onsight and with only a handful of pegs.

While abseiling we decided to add some nuts to help route-finding and started to "debate" about the grades: Nicola preferred stiff grades, I opted for something easier. In the end we came up with a compromise and settled for the average.

We were very happy with the feedback from those who already repeated the route and hope that in the future climbers who repeat the route will at least in part feel the same excitement as we did.