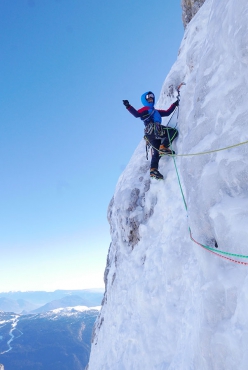 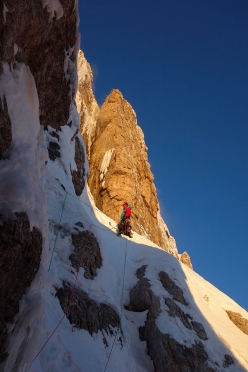 CRAM Cima Brenta: Matteo Faletti setting off after the bivy as dawn breaks on pitch 8.
Photo by archivio Alessandro Beber 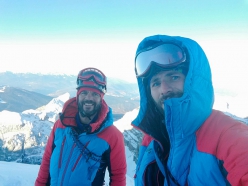 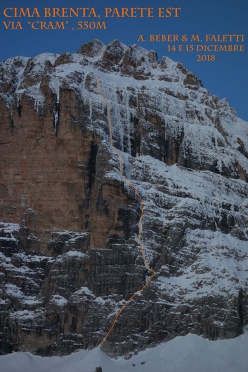 Winter mountaineering in the Brenta Dolomites: on the east face of Cima Brenta, Alessandro Beber and Matteo Faletti have made the first ascent of the important new ice and mixed climb CRAM (550m, AI5, M6, 90°). Beber and Faletti report.

From 14 to 15 December 2018 the two Italian mountain guides Alessandro Beber and Matteo Faletti forged an important gem up the east face of Cima Brenta in the heart of the Brenta Dolomites. So beautiful in fact that Ezio Marlier, a famous mountain guide from Valle d’Aosta, described the mixed climb in no uncertain terms as "the most beautiful line in the Alps this year”. Further confirmation of the route’s beauty and AI5, M6, 90 difficulties came from Mirko Corn and Luca Caldini who repeated the line in a single day on 23 December 2018. The new route is called CRAM and success came about after a failed previous attempt in 2014. According to Beber the new line is "technically not extreme, but provides beautiful climb on all 14 pitches. In short, an adventureous outing. I couldn’t have asked for anything better."

C.R.A.M. up the Cima Brenta by Alessandro Beber

When on holiday, don’t browse through your social media, or you’ll end up wanting to be somewhere else! I find myself breaking this simple rule In the "Organ Pipe Cactus National Monument" visitor center in southern Arizona, as I browse absentmindedly on Facebook. I'm on holiday with my family in the US, but winter has already set in at home. A friend has posted a selfie of herself on the summit of Croz dell’Altissimo, in the Brenta Dolomites, and behind her I notice the east face of Cima Brenta, plastered in snow and ice like Ben Nevis...

What a joke! For the last four years I’ve been keeping an eye on a striking, ephemeral sliver of ice,, and now that it’s finally formed perfectly I find myself on the other side of the world, surrounded by wild cacti... Trying not to think about it too much, I do wonder whether I’ll have a chance at climbing it on my return.

In order to keep my impatience at bay, I keep myself up-to-date with Matteo Faletti who’s bewitched by this line at least as much as me. He works at Paganella in winter and from there he’s been able to scrutinise the line for a while.

11 December 2018: during my return journey home I put the other members in pre-alarm. I have 3 days off before work begins, good weather has been forecast and the temperatures should drop to well below freezing ... we simply have to give it a shot!

At the end of 2014 we had made an attempt, but sudden strong winds had channeled scary spindrift down the face, making progress virtually impossible. The temperatures then rose and the sliver of ice disappeared in no time at all. Seeing that almost our entire mountain guides school was in on the effort, I decided to call the route C.R.A.M., which stands for Mountime Corporate Recreational Club.

After Argento Vivo up Piccola Civetta I’d found another dream line that needed courting, and so each winter I returned in the hope of seeing that it had come into condition, but in was never to be. Now though it seemed like the time was finally ripe.

Unfortunately, due to my short advance notice not everyone managed to take time off, nevertheless at 3.30 am on 14 December Matteo and I geared up in the car. We were supported by Simone Banal who had offered to help haul gear to the base of the wall.

Six hours and a liter of sweat later we were ready to begin our climb, we said goodbye to Simone and set off loaded with climbing gear, sleeping bags, a stove and food for 3 days.

The first pitches were far drier than on our previous attempt and therefore more harder, interspersed with some sections of delicate mixed. Our previous abseil belays were far higher and harder to reach, indicating that there was a lot less snow this year.

An easy but extremely exposed traverse provided access to the main drip, where we reached the motorway of ice that shot us directly upwards. Perhaps, however, we didn’t climb like rockets, because when darkness set in were were still climbing and continued to do so for a couple of hours before finding a sheltered bivy spot. We dug away and settled in for the night.

It had been so cold that we'd forgotten to drink all day, so we tried to replenish fluids and then melted snow and refilled our thermos. During the night the winds picked up which, added to the -20 °C, produced a pleasant windchill effect that froze everything, including our thoughts.

We felt somewhat stiff in the morning but being on the move again was a real pleasure. We were right below the upper section of the wall when the the first rays of sun touched us for for a couple of minutes: the huge and steep drips above shone magnificently.

Somewhat timidly we tried to understand the consistency and reliability of the ice. Fortunately, the ice screws seemed to hold well enough, although we tried to protect all belays on rock. Like two happy young children we enjoyed this wonderful climb in its surreal environment.

Shortly before 3 pm we reached the Garbari ledge and the end of the difficulties. We would have liked to continue on to the summit and put a symbolic end to our adventure, but given the imminent darkness we decided to walk down the path that in summer leads from Bocchette Alte towards Bocca di Tuckett and then back down to valley. At dinner time we rediscovered the joy of having a beer next to the radiator in a bar in Molveno.

A heartfelt thanks to Matteo Faletti for the trust, enthusiasm and vision that he has always shared with me on our adventures together. Thanks to Simone Banal for his extraordinary generosity and for always being there when needed. And finally, thanks to all those friends for their heartfelt appreciation of our new route… happiness, when shared with others, is worth twice as much!

Via C.R.A.M. up Cima Brenta by Matteo Faletti

Adventures with a capital A are still there to be experienced, even in our backyard mountains, you just need to know how to wait and look for them, through the curious eyes of a child. Life surprises us every time we decide to look just that little bit further, whenever we decide to leave our comfort zone .. if we have an open, a free mind, then we can experience unforgettable moments.

The mountains provide us with the opportunity to live out our love for this sport and experience unique moments. And your climbing partner, your friend who follows you, who helps you, who spurs you on when you’re in difficulty and who shares everything with you, is the best friend you can possibly have.


* update: CRAM was repeated on 23 December 2018 by Mirko Corn and Luca Caldini, who confirmed the route's beauty and difficulties
** on 23 December Simone Banal, Fabrizio Dellai and Marco Zanni established a new route up the nearby North Face of Cima Brenta called Tigersoft.