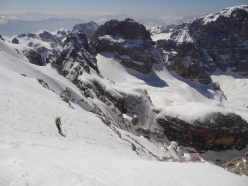 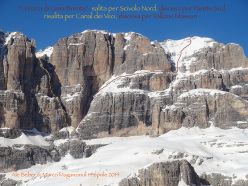 The video of the ski descent of the South Face of Cima Brenta, carried out by Alessandro Beber and Marco Maganzini in spring 2014.

In spring 2014 the two Italian mountain guides Alessandro Beber and Marco Maganzini skied the exciting and amazing line down the South Face of Cima Brenta in the Dolomites. A descent that, apart from the fact that it is probably the first time it has been descended on skis, was part of a great project to “explore Cima Brenta where I’d never been before on skis.” explained Beber, adding “We climbed the North gully, skied down the South Face, ascended another gully I believe has never been done before (at least in winter) and then descended down the Massari gully, a classic winter outing ... ".

The descent down the South Face follows the line first climbed on 22 July, 1882 by A. Falkner and T. Compton with the guides and A. Dallagiacoma and M.Nicolussi, while on 3 May 2006, the same route was ascended, with skis, by O. Oprandi, P. Calzà and G. Maffei during their enchainment of Cima Tosa and Cima Brenta. As is clear in the video, the descent came about thanks to the exceptional snow conditions found in spring 2014. Skis were never taken off and only 20m were sidestepped on the final section, without ever needing an abseil.