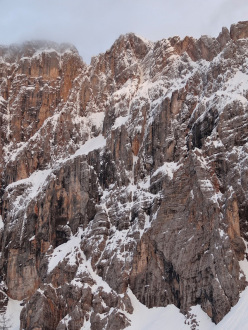 Stefano experiments the other meaning of "Ice Cream"...
Photo by Alessandro Beber 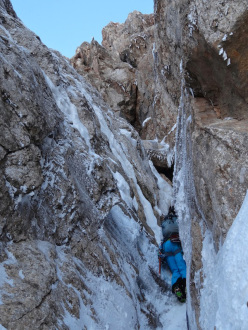 it gets narrower and narrower
Photo by Alessandro Beber 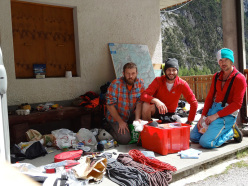 Gear check before the start
Photo by Alessandro Beber

Argento vivo up the North Face of Piccola Civetta, Dolomites

With this sweltering summer heat it seems almost impossible that a month ago exceptional winter conditions could be found across the entire Alps. Conditions which enabled the Italian mountain guides Stefano Angelini, Alessandro Beber and Fabrizio Dellai to make the first ascent of Argento vivo, a beautiful 1350m line up the North Face of Piccola Civetta, with difficulties to WI 6+, M8, A2, V+, breached via two bivies.

ARGENTO VIVO... OR, THE DOLOMITES LIKE THE EIGER by Alessandro Beber


First note: during this generous winter my ice axes rarely got to see the light of day... So a couple of months ago, when I woke up with the strange thought of wishing to climb a new route on the north face of Piccola Civetta, I was the first to be amazed by this crazy idea.

Second note: despite having spent much time recently on Monte Civetta recently, I'd never been here before in winter and so I didn't have any photos of this mountain in its winter garb... not of it in summer for that matter, seeing that the portion of the face to the right of Cristallo hasn't received much attention for more or less a century!

With this in mind it occurred to me I could ask Debora, a friend from Colle Santa Lucia, to take some photos of the face and send them to me, just to check whether the line I'd thought of actually existed or not. When the images arrived I almost fainted: "the route" really did exist! Sure, some sections were unclear, but for more than three-quarters of the face the line followed an obvious series of gullies sunk deep between large pillars.

What followed was the agonizing wait for the "stars to align", namely a 4-day spell of good weather combined with low temperatures and work commitments that could be postponed to a later date. On Saturday 11 May Matteo, one of participants of the spring powder snow course, told me (I'll be thanking him for ages) that he'd be unable to make it due to a problem with his knee. After having checked with the others the course was postponed, which meant that a few days were suddenly free...

The weather forecast was good; unfortunately a bad weather front was expected to arrive on the 16th, so... it was now or never! I had to find partners willing to leave tomorrow morning (Sunday 12th), which was easier said than done: in the end Fabrizio ‚ÄúBicio‚Äù Dellai and Stefano ‚ÄúMalcom‚Äù Angelini agreed, my friends and Mountime Mountain guides colleagues.

On Sunday morning we raided the first supermarket that was open, reached Capanna Trieste and prepared our gear and heavily laden we set off to the Tissi shelter. We laughed and fooled around all the way to Pian dela Lora, where the poor snow gear wiped all the smiles off our faces. Despite our snowshoes we sunk in all the way to our knees and to make things worse it started to rain. Our packs suddenly felt unbearably heavy.

We were already rather disheartened when all of a sudden the clouds parted and the evening sun shone onto the face and "our" line... seen from up close, it seemed even more attractive than before. Driven by pride we finally reached the Tissi winter bivy after 5 and a half hours; way better than any imperial suite!

When dawn broke we had already climbed the first pitches that traverse towards the gully proper, then up we went from one couloir to the next... after two delicate mixed pitches we reached the base of a narrow vertical drip which didn't seem all too difficult. Unfortunately the ice which seemed good actually turned out to be spongy snow, and so Stefano found himself having to continue in the hope of being able to find good pro higher up. An illusion he nurtured all the way to the belay. Shortly afterwards, however, our moral was boosted: a pitch up real ice, hidden inside a sort of chimney where huge wedged boulders would otherwise have barred the way... talk about fortune favouring the bold!

Up we went, quickly, past the snowfield above Cristallo... some challenging ice pitches alternated with wider snow couloirs wider where the slope angle never enabled us to do anything by climb on "all fours"... We began to look around in search of a place which was vaguely flat for our bivy, but night overtook us while we were still searching, unsuccessfully. A night on our crampon tips seemed likely, but Bicio wouldn't be deterred and he begun to "dig wildly" (yes, this seems like the best way of describing it) into the slope to create a sort of open air mini apartment, big enough for all three of us. What more could we ask for? Central heating perhaps, but we knew how to make do.

We set off early the next day full of hope: in theory only 250m vertical metres separated us from the top... But the gully became increasingly steep and narrow while the ice began to thin out and became nothing more than a delicate layer glued to the rock. We then stumbled across another "secret passage" below a boulder and... game over! The gully terminated below a series of huge roofs. We looked at each other: we'd realized a long time ago that there was no way of escaping to the left or right, and that a retreat would have been simply impossible. So we tried to forge our way up the only viable line, a thin crack which we breached seven hours and 2 pitches later, mainly thanks to Stefano and his great dry tooling ability. We'd finally breached the overhangs! A great pitch up the "dry" pillar - the only section that could be climbed without crampons - led to the final slope and then the summit ridge. I reached this just in time to peek down onto the other side with the last light, and I then descended a few metres to dig our second bivy (much colder than the first!), using the tried and tested "Dellai method." To celebrate our ascent we ate all our supplies and our teeth chattering in rhythm as we avoided thinking about the descent...

While the night was starry night, the next morning greeted us with thick sea of fog so we changed our plans to climb the ridge and head towards Rifugio Torrani, and instead we improvise a descent down the SE Face. We abseiled down following our instinct (or chance, if you prefer) down the couloir that separates Piccola Civetta from "Grande" Civetta. When we finally touched the Van delle Sasse plateau we kissed the snow just like Columbus had kissed America's shore, and then we trotted happily (read we dragged ourselves dead tired) down into the valley and back home.

PS: "Argento Vivo" seemed like our line at dusk, lit by a crescent-shaped moon. "Argento vivo" is also that desire that climbers know all too well, the one that drives you into the mountains and maybe even makes you return home happy after having spent four days in the freezer!

Technical Notes
- 1 set of friends from 0.3 to 4 + 1 set of nuts
an assortment of 21 pegs
4 deadmen (3 taproot and 1 scoop)
food supplies for 3 people for 3 days
3 sleeping bags
2 stoves (so as not to end up like Piussi on Solleder in winter, who had to burn his wooden pegs to melt water!)
- Gear in-situ: 3 pegs on the route
2 deadmen and 11 pegs on the descent