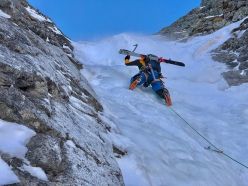 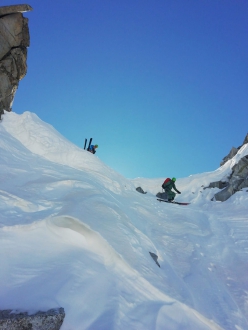 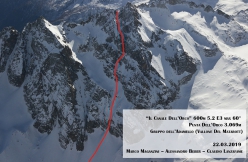 The line of Canale dell’Orco on Punta dell’Orco above Val Genova in the Adamello group, skied by Alessandro Beber, Claudio Lanzafame and Marco Maganzini on 22/03/2019
Photo by archivio Beber, Lanzafame, Maganzini 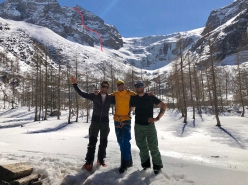 Alessandro Beber, Marco Maganzini and Claudio Lanzafame after having skied Canale dell’Orco on Punta dell’Orco above Val Genova in the Adamello group on 22/03/2019
Photo by archivio Beber, Lanzafame, Maganzini

Marco Maganzini reports about what is likely to be the first ski descent of 'Canale dell'Orco', carried out on 22/03/2019 with Alessandro Beber and Claudio Lanzafame on Punta dell'Orco (3069m) above Val Genova in Adamello massif of the Italian Alps.

Val Genova is a superb valley that leads off from Val Rendena straight into the heart of the Adamello and Presanella groups, described by the late 19th century mountaineer and explorer Douglas William Freshfield as the "Versailles of Italy”. We like to think of its right-hand branch, Vallone del Matarott, as the "the Argentière of Rendena”. For good reason: this is a fascinating cirque, full of waterfalls that every winter transform this place into a remote, isolated enchanted kingdom.

With this report I would like to pique people’s curiosity and help others discover this treasure in Val Genova, even if, like everyone who cares intimately about something, I’m torn and tempted to keep it all to myself!

The gully that we were lucky enough to ski is on the right-hand side of valley, hidden and set like a precious jewel in the folds of the NW Face of Punta dell’Orco, only partially visible from the area surrounding Rifugio Mandrone.

The adventure we experienced proved exciting and this wasn’t only due to the difficulties we encountered during the descent, due to the angle, exposure, etc. but rather due to how it all came about. We were driven by the spirit of search and exploration, a desire to discover something new and we were rewarded with a gully that was both beautiful and logical.

These are all values ​​that characterize the quintessence of "ski mountaineering” and it is these, more than the difficulties themeselves, that are what makes this activity so beautiful…

At times the search and ensuing pleasant discovery of what you had imagined becoming a reality is as satisfying as the actual ski descent.

We were lucky because the gully was in great condition. It has to be said though that in some ways we deserved our luck, since this wasn’t our first attempt. It really was worth the effort!

It was worth making our way up into the wonderfully wild and isolated corner of Val Genova on several occasions, reaching the base of the remote gully, attempting it, bailing, courting it again, giving up once again before learning to listen and comprehend when the time was finally right.

It was worth observing this line from afar, every time I went to Adamello, sensing the possibility of a descent and asking the mountain to wait for me.

It was worth carefully studying the face through our binoculars from the Mandrone hut in an almost maniacal manner.

It was worth deciding that the time had finally come, that we were still motivated to give it one more go, to climb it and turn the tips downwards into this 600m gully. The courtship had been intense, the rewards even greater.

It was worth sharing it with friends and savoring every turn together, dedicating it to those who love us and were waiting for us, somewhat anxiously, back at home...

Note: The gully was skied completely down to the final ice section, where we made one abseil.