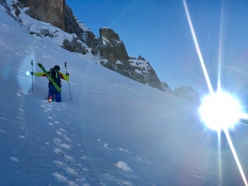 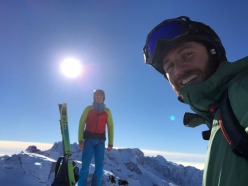 Claudio Lanzafame and Marco Maganzini have made a first ski descent on the northwest face of Pietra Grande in the Brenta Dolomites, Italy. Lanzafame reports about True Love, climbed and skied on on 20/12/2018

A first ski descent, down a line that everyone can see, visible even from the Grostè slopes, on Pietra Grande in the Brenta Dolomites. The line is logical but finding the right conditions is difficult as the various exposed sections need a fair bit of snow cover in order to be skied properly. Alternatively, you need snow like the one we have this winter, not particularly abundant but stable at the start of the season above 2500m. In short, snow which reveals descents which can’t always be achieved.

We reached the top of Grostè by taking the lifts, then descended by skiing down to the Graffer hut. After checking some of the passages with the help of a drone and modified our original line right at the last minute thanks to Mark’s hunches, we put on our skis and rucksacks and began to climb this wild wall in Pietra Grande group. And then we skied down it, using ice axes and crampons on only the steeper (70°), frozen sections.

NB: on 28/01/2015 Luca Dallavalle carried out what is believed to be the first ski descent of the west face, via aline slightly left of True Love that took him all the way up to the crest.