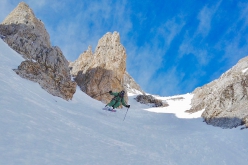 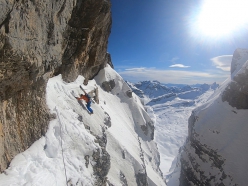 Andrea Cozzini on the traverse while making the first ski descent of the south face of Pietra Grande, Brenta Dolomites, on 14/02/2019
Photo by Claudio Lanzafame 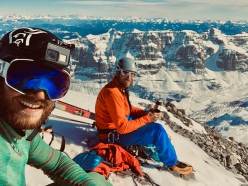 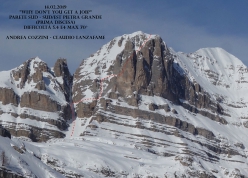 On 14 February 2019 Andrea Cozzini and Claudio Lanzafame skied a line called ‘Why don’t you get a job?’. This is likely to be the first ski descent of the SSE Face of Pietra Grande in the Brenta Dolomites.

The initial part of the descent, circa the first 100m, is visible from the Express chairlift at Grostè, in the Pietra Grande area of the Brenta Dolomites. The rest of the descent can be seen by continuing along the traverse that leads towards Val Delle Giare.

We ascending with climbing skins, made some tight kick turns and reached the traverse. This has some exposed sections protected with some Friends, nuts, pegs and ice screws. It wasn’t particularly difficult but, given the unstable snow and exposure, required some attention.

After negotiating the 60m traverse, we continued past some rocky and icy terrain to reach a steep wall that led to the summit. We skied everything except for there traverse. some rocks and ice a little more, until you reach the steep wall that leads up to the top.