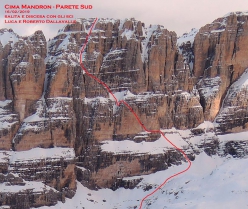 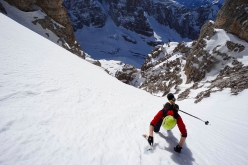 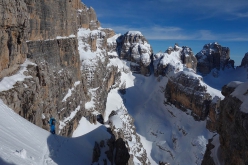 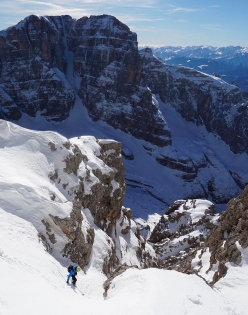 On 16/02/2019 Roberto Dallavalle and his brother Luca made the first ski descent on the south face of Cima Mandron in the Brenta Dolomites.

On Saturday 16 February 2019 the Dallavalle brothers became the first to ski an extremely technical line down the south face of Cima Mandron, the huge rock face that overlooks the Brentei refuge in the heart of the Brenta Dolomites. The line connects three distinct gullies and while the upper section is visible from the famous Canalone Neri couloir, the central and above all lower sections are comprised of rising traverses wedged between the rocks. Their hidden nature is probably the reason why, until now, the line had never been considered before.

Talking to planetmountain.com, Luca Dallavalle stated "I’ve skied Canalone Neri on several occasions in the past and I’ve always looked across onto the south face of Cima Mandron, wondering whether it was feasible with skis. In summer though this beautiful face is criss-crossed by several important rock climbs, some of which extremely difficult, so I never really thought about it seriously until about a month ago. We were skiing on the Sfulmini and from there I managed to evaluate the possibility of skiing the lower section. At the time there was a lot less snow and I never imagined that the lower gully was skiable and that it could be climbed with ease. I was almost certain that the easiest way to ski the line was ascend Mandron via the simpler north face and then ski the south to the end of its lower gully before making a rappel."

On Saturday morning Luca teamed up with his younger brother Roberto and they skinned up into the area not to ski the line but for a reconnaissance trip to evaluate conditions. "Close to the base on the Brenta south face route we noticed an access gully, so we decided to give it a go."

The two started climbing late in the day, past a 1-meter wide ledge that ascends diagonally for about 20 meters and provides access to the first hidden couloir. "The first couloir is very narrow, only 2-3 meters wide, and leads into the heart of the face, the second is the most skiable and ascends between fantastic towers, the third couloir is the steepest (important sections up to 55°), and here we breached a 3-4m step of rock past grade III climbing."

After about 550 meters the duo summited at about 14:00, and after resting for half an hour they began the descent, along the line of ascent. They downclimbed for less than 30 meters and made no abseil. "We didn’t make a rappel, also because we didn’t have a rope with us. As I said, the descent wasn’t our precise goal, but the higher we got, the more we realised that conditions were ideal so we kept pushing on. We knew we’d be able to downclimb anything we’d climbed on the way up."

As for the descent, Luca explained "the line is very exposed throughout, it winds its way down a vertical face with its 2-300m drop, you can’t afford to make any mistakes. We had good conditions, the sun had transformed the snow perfectly. Saturday’s ascent and descent were an amazing discovery, certainly one of the most beautiful descents I've ever done."