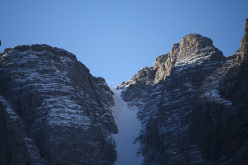 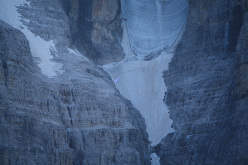 The report by Luca Tamburini who, together with Jacopo Pellizzari, made the first speedflying descent of Canalone Neri, Brenta Dolomites.

Speedflying is a new discipline that derives from paragliding and uses a small wing designed specifically to speed down gullies and slopes. It is mainly done in France, Switzerland and Italy's South Tyrol.

This summer, while doing the season at the Refuge T. Pedrotti alla Tosa, I started a new adventure... called speed flying. I mainly trained on Mt. Daino and thirty or so other slopes. Once familiar with my spitfire, Canalone Neri became my one and only thought. It's 1000m high and a unique natural amphitheater and so I immediately thought it could be the absolute max for speedflying. So much so that I embarked on this adventure on 12 September for the adventure, only to be surprised by a sudden storm. I returned to the refuge disappointed and waited impatiently for a second chance.

On 20 September I finished the season. Aspiring mountain guide Jacopo Pellizzari, 22 years of age from Condino, had begun to dart down mountains with his glider and we joined forces, sped down various gullies and leapt off the North Face of Presanella. Adventures are more fun when you're with someone else, so we decided to do the Neri gully toether. On Saturday 1 November we walked up to Rifugio Brentei. After a short briefing and we hit the sack!

We set off at 5:00am the next morning and at 8 we reached the entrance to the Neri gully. The weather was good and we couldn't wait to dart down this wild and fantastic setting. After 90 seconds we landed at the foot of the gully without ever exiting this amphitheater, our dream had come true!

Our flights are the result of attentive, comprehensive studies. Meteorology, wind conditions, prevailing snow conditions, the ability to move quickly in the mountains, safe and responsibly! As soon as you enter the Neri gully you have now to deal with a 10m gap and you simply cannot afford to make a mistake at this point. There are often strong undercurrents in the Brenta Dolomites and the wind often changes direction and intensity. What makes me happy, more than anything else, is the fact that we managed to do all this safely and with a carefully calculated risk margin.

I'd like to sincerely thank Fabiano Ferretti, Gianni Faccini, Luisa Tarter, Gloria Faccini and Luca Moneghini for having joined us on this adventure and for having filmed from various different angles Next month we'll release the full video on vimeo.