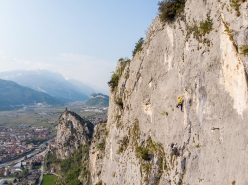 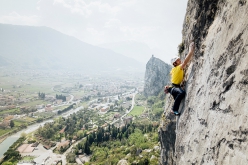 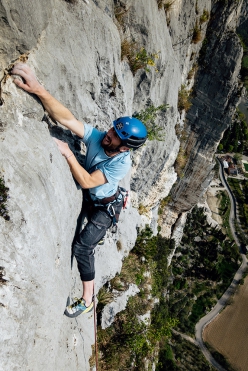 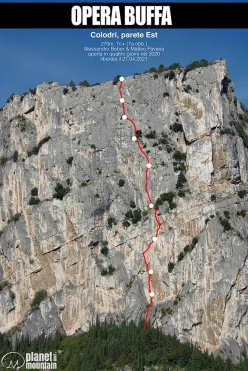 The east face of Monte Colodri looks very much like a painter's messy palette: contrasting pastel colors and motley hues, plays of light and shadows that vary continuously as time passes. In the morning the sun gradually illuminates the mountain from top to bottom, like a spotlight that slowly reveals a stage. And when you look at it, you realise immediately that that's where you have to climb!

After having spent years admiring all its features, the idea of ​​trying to wedge an independent line between all those already there felt almost like a joke: but we decided to give it a go nevertheless, motivated properly but without false expectations, because given how little virgin terrain was available, the risk of our experiment failing was quite high.

We set off with Jiri Leskovjan and created a gap in the jungle that protected the first pitch, and this led us to the base of an interesting series of cracks. From here we let ourselves be guided by the most logical line.

We set ourselves the usual simple rules: free climbing ground-up, placing a bolt every time we needed to rest on a cliff hook or any other type of pro, and no inspection by abseil.

It was a real pleasure to share this first ascent with Matteo Pavana, who proved to be just as talented on a rock face as he is behind the camera. The time has come to let Jimmy Chin know he’s got a fine alter-ego in Trentino!

The name of the route, Opera Buffa, is intended as a tribute to Patrick Edlinger's magical Opera Vertical; we’re fully aware of the fact that our small climbs are almost comical and somewhat clumsy when compared to the those of the great artists who, in the past, really showed us how to dance up a rock face.

Elio Mazzalai, Nicola Cont and Sebastiano Merz made the first repeat on 25 April 2021 and confirmed the route’s beauty. A heartfelt thanks to friends Jiri Laskovjan, Simone Banal and Alberto Fedrizzi who helped and accompanied us during our attempts.

19.10.2018
Arco rock climbing: Mescalito on Colodri, the classic multi pitch climb by Renato Bernard and Renzo Vettori
The route topo of Mescalito up Rupe Secca on Monte Colodri in Arco, the multi-pitch rock climb first ascended in 1982 by Renato Bernard and Renzo Vettori and widely considered a masterpiece of the Sarca Valley. By Carlo Cosi, mountain guide.

05.05.2015
Colodri: Geremia and Mabboni climb new route above Arco
On Monte Colodri, Arco, Daniele Geremia and Diego Mabboni have made the first ascent of opened the new climbing route Piccolo Diavolo (8a, 7a obligatory, 300m).

02.11.2008
New rock climb on Monte Colodri, Arco
Massimo Antonini and Giampaolo Calzà have made the first ascent of Via Giovanni Segantini (280m, 6c+ max) on the East Face of Monte Colodri (Arco, Italy)