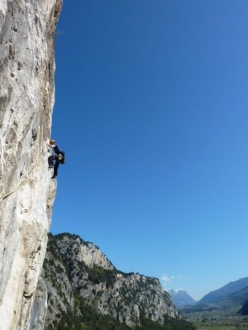 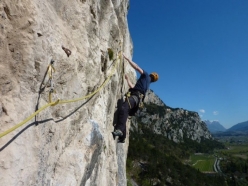 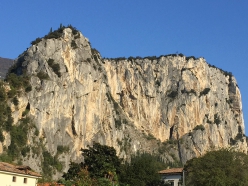 Monte Colodri at Arco, on the left Rupe Secca and Rupe del Castello
Photo by Planetmountain.com

An absolute masterpiece, established by abseiling in from above by Manolo and Roberto Bassi in 1983, Zanzara e Labbradoro is perhaps the most sought-after multi-pitch sport climb in Arco and the entire Sarca Valley. The route offers technical climbing up exceptional rock and climbs the stunning white pillar that dominates the East Fall of Monte Colodri. For many years this climb was considered an important reference route and despite its age it has lost none of its appeal.

After an easy start the third pitch checks in at 7a+, the climb’s technical crux. This is followed by an exposed sideways traverse, graded 6c, which should not be underestimated, and nor should the next 7a pitch. After this blazing start the intensity drops, at least, on paper, but climbing all the remaining pitches free all the way from the half-height ledge to the summit requires plenty of stamina and concentration.