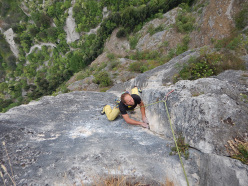 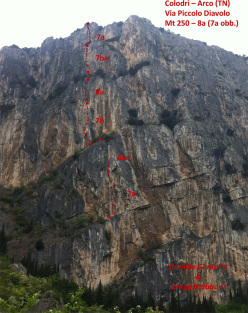 On Monte Colodri, Arco, Daniele Geremia and Diego Mabboni have made the first ascent of opened the new climbing route Piccolo Diavolo (8a, 7a obligatory, 300m).

At first glance it might seem unlikely that there is still room for something new on Monte Colodri, the historic face above Arco observed and scaled by generations of climbers. But there is, especially if you look as carefully as expert local Diego Mabboni and Daniele Geremia who in 2011 forged a line to the left of White Crack, an route first climbed in 1979 by Roberto Bassi and Gigi Giacomelli. The new Piccolo Diavolo, Little Devil, was climbed ground-up and breaches virgin rock to the left of White Crack with which it shares the 2nd and the 5th pitch on those ‘balconies’ suspended high above River Sarca. According to Geremia the 300m route is well-bolted but the grades are by no means easy. At present all pitches have been freed individually but the route still awaits its first single day free ascent.

I was working as a guide in Arco, canyoning and doing vie ferrate and in my time off I looked around for new places to bolt and climb new routes. The potential at Arco appeared to be nil, but Diego noticed a line that jiggles between some old routes on the Colodri face, starting from the second ledge that joins the second pitch of White Crack. At first it seemed impossible that there was room for a route, but in the end his idea proved excellent.

The route was bolted in 2011 during three days and breaches excellent rock. Six long pitches climb the full height of the South Face of Colodri, with difficulties up to 8a past obligatory 7a climbing. The first pitches are a good warm up for the smooth grey rock and overhang that is difficult to onsight.

A few days ago, after cragging at Arco followed by a wild evening into the early hours of day, my brother Enrico, Luca Matteraglia, Claudio Migliorini and I decided to repeat the route. When I made the first ascent it didn’t seem too tough but since it hasn’t had any repeats and since there were no chalk marks to follow, reading the moves proved difficult.

The distance between the bolts isn’t extreme but you certainly have fun spotting the moves when climbing from one bolt to the next. As mentioned, six long pitches (about 35-40 meters each) lead past two small terraces up the entire face; it starts with a 7a and then settles in softly at 6a+ to then reach a more sustained finish: a 7b slab, an 8a overhang, a technical 7b+ and a final 7a pitch up tufas.

Thanks to Wild Climb and Red Point for the gear.


03/11/2008 - New route on Monte Colodri, Arco
Massimo Antonini and Giampaolo Calzà have made the first ascent of Via Giovanni Segantini (280m, 6c+ max) on the East Face of Monte Colodri (Arco, Italy)