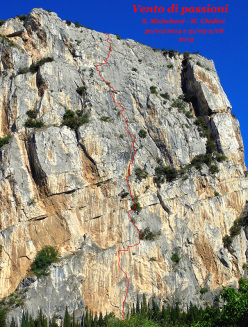 Alpine logic... What is alpine logic? From a traditional point of view,at least here in our world of the Dolomites, this logic has to do with following the lines of weaknesses and, at the same time, following the most direct line. It’s a hotbed of ethics. One that follows what nature offers, the other is more human and ambitious… it follows the line a drop of water would make as it falls from the top of the face to the bottom.

On observing Monte Colodri, with all its historic routes and important past as a prime player in this small climbing universe, one would not believe that there is still room for an intuition that might result in this classic alpine logic. But on closer inspection, there is room after all. Yes, as we’ll discover there’s plenty f room. I’ve established plenty of new routes and often my eyes observe possible lines, but up there, on one of the most famous cliffs in the Sarca Valley, forging something new seemed like an absurd fantasy.

In 2005 a first small reconaissance boded well, but for the next ten years I didn’t find the time - and desire perhaps - to get involved in a project that had so many question marks.

Marco was my client (I’m Mountain Guide), full of passion and desire to learn. In a very short time he became really good at climbing and so I suggested we team up together, as climbing partners on a par, for this adventure . Obviously, his response was enthusiastic.

In October 2014 we got the ball rolling, but the rainy autumn following the just as wet summer stopped our first assault. Winter then came along with cold, short days and we had to give it a miss. Spring 2015 arrived with warm temperatures, stable weather and good conditions ideal to train and prepare for the challenge. At the start of June we set off.

In two days reached our summit, two days during which we struggled to climb the line we’d identified from below. The biggest surprise: the obvious corner at half-height which, being so logical and obvious, seemed to have been climbed before… but instead …

The style of the route reflects that od modern alpinism born in the ‘80s, which influenced me heavily and which I prefer for my climbs. Just a few pegs, wherever possible trad pro, but a bolt here and there where the game would otherwise become too dangerous (at least for me ...).

I consider belays very important in order to provide a climb without too many worries, especially on peaks like there in the Garda region where climbers often try things that are out of their league. So we equipped all belays to make them as safe as possible.

We cleaned the grass off the top of the face, attempting to free the obligatory sections, but I’m sure as the route is repeated it’ll get cleaner… What else? Oh yes, safe climbing!